Died from a embolism after childbirth

Gina Williams
Cindy Williams (previously Beale) was the ex-wife of Ian Beale, mother of Steven, twins Peter and Lucy and Cindy, as well as the grandmother of Louie and Abi.

Cindy arrives in Albert Square in May 1988, working on her mother's market stall selling hats. She dates barman Simon Wicks, who is also seeing Donna Ludlow, leading Cindy and Donna to fight for Simon's attention. However, Cindy grows tired of Simon's womanising, and despite his feelings for her, Cindy moves on to Ian Beale, who is becoming a successful entrepreneur. Initially, she only wants to make Simon jealous but she and Ian start dating, and by February 1989, they announce their engagement.

Meanwhile, Simon retaliates by reconciling with Sharon Watts. However, while working together late one night at The Queen Victoria public house, Cindy and Simon have sex and Cindy becomes pregnant. She suggests leaving Ian for Simon, but he refuses, not wanting to be tied down or upset his family, so Cindy marries Ian, letting him think he is the baby's father, giving birth to Steven in December 1989.

Simon decides he wants to be a father to his son and convinces Cindy to leave Ian, devastating him with the news that Steven is not his son and a feud erupts when he realises Simon is the father. Ian's behaviour grows erratic; after attempting suicide and failing, he chooses to ruin Simon's life instead, so Simon decides to leave Walford with Cindy and Steven, leaving Ian heartbroken.

In 1992, Ian discovers that Simon has abandoned Cindy and Steven. Ian persuades her to return to Walford so he can help her bring Steven up. They reunite, and Cindy gets pregnant in 1993. Richard Cole is romantically interested in Cindy but she rejects him, so Richard tells people that he is the father of her twins. Everyone believes him, and Ian and Cindy almost separate, but the truth emerges, just before Lucy and Peter are born in December. Married life and motherhood take its toll on Cindy, and she has two affairs, first with Matt, a lifeguard, in 1994, and then with Simon's half-brother, David Wicks, also Ian's half-brother, in 1995. Cindy and David meet secretly for a year, and she falls in love with David, growing less and less tolerant of Ian. Suspecting Cindy is cheating, Ian hires a private investigator, who films Cindy and David in a clinch. Ian vows to take Cindy to court for custody of their children. David loses interest in Cindy, so she takes drastic action, and in October 1996, she hires a hitman to kill Ian. Although Cindy changes her mind, it is too late, and Ian is shot, collapsing in a pool of blood in front of Cindy. The police suspect Cindy is involved, and when David is called in for questioning, Cindy knows she will soon be under arrest, so decides to flee with her children. Assisted by David and Barry Evans, she collects her sons, but is unable to get Lucy, and is forced to leave without her. David also stays behind, promising Cindy that he will try and get Lucy and join her later, but he never does. Ian's private investigator tracked Cindy to Italy in 1997. Ian, Phil Mitchell and Grant Mitchell find her, and Phil and Grant abduct Steven and Peter while Ian claims he still loves Cindy and will forgive her. Desperate to get her daughter back, Cindy goes along with him but grows suspicious and calls the police, but it is too late. Despite a police chase, Ian brings his sons back to Walford. Cindy soon follows Ian back to Walford with her new boyfriend, Nick Holland. She takes Ian to court for custody of the children and wins. However, moments after the verdict, Cindy is arrested for attempted murder when Ian's associates persuade the hitman to tell the police about Cindy's involvement, so she loses and Ian wins full custody of the children and Cindy is charged and held on remand while she is pregnant by Nick. After realising Cindy is guilty, Nick leaves her in prison without any money for a lawyer. On the 5th November 1998, Ian receives news that Cindy has died in childbirth. Her daughter survives and is named Cindy by Ian, in her mother's honour. Gina, Cindy's sister, gains custody. 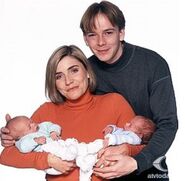 Cindy Beale and Ian Beale
(22 January 1996)
Add a photo to this gallery
Retrieved from "https://eastenders.fandom.com/wiki/Cindy_Williams?oldid=200447"
Community content is available under CC-BY-SA unless otherwise noted.