EastEnders Wiki
Register
Don't have an account?
Sign In
Advertisement
in: Characters, Female Characters, Past Characters,
and 4 more

Jonathan Hewitt
Christine Hewitt made her first appearance on 25 February 1992. She is portrayed by Elizabeth Power.

Christine is first seen in February 1992, as a client of Arthur Fowler who is hiring himself out as a gardener. After Arthur advertises for a new gardening assistant, he is shocked when Christine arrives in Walford, enquiring about the job. She wants it for her son Jonathan, but when he proves lazy and unreliable, an embarrassed Mrs Hewitt takes his place as Arthur's assistant.

In May 1992, a phone call from New Zealand brings news that Kenny Beale has been in a car crash, so Arthur's wife Pauline decides to go there to tend to her crippled brother. While Pauline is away, Christine becomes a regular visitor to Albert Square, causing a certain amount of gossip, and it is clear that she is becoming very fond of Arthur. Arthur is oblivious, but Pauline's brother, Pete Beale is more astute and he tries to remind Christine that Arthur is a married man. However, Christine manages to win him round and Pete starts taking her out for a while instead. In August, things come to a head when Christine actually makes a pass at Arthur. He turns her down and she disappears, sending him a letter and a photo conveying her feelings. Arthur visits her at her house, and tells her that he feels something for her too, but is married and loves his wife. They say goodbye and the matter seems to be over.

When Pauline comes home, however, she learns all about Christine from gossips such as Dot Cotton. She initially believes Arthur when he feigns innocence, but all that changes when she discovers Christine's letter and photo. A furious Pauline then visits Christine to discover the truth, and finds her to be a sad, lonely figure who drinks too much of an afternoon. Pauline is then persuaded to forgive and forget, but Arthur cannot resist one last rendezvous with Christine himself, which gives her renewed hope. Over the next few weeks, Arthur keeps finding excuses to drop in on Christine, until she tells him not to come unless he means business. On Christmas Eve, Arthur sneaks away from home to be with Christine and finally the inevitable happens and they end the night having sex together.

The affair continues during 1993 with Arthur continuously running between Christine and Pauline. Christine becomes more needy and manipulative, cooking up absurd lies and a fake burglary to lure Arthur round, then hitting the bottle if he refuses to come. Kathy Beale's decision to open the café in the evenings as a bistro gives Christine an opportunity to see more of Arthur — she applies to be the cook and gets the job. However, working in Walford is not enough for Christine, and she begins to make greater demands on Arthur, asking him to choose between her and Pauline. Arthur manages to put her off and begins having second thoughts about their affair, after which Christine's behaviour becomes more erratic. She begins stalking Arthur around the Square, drunkenly declaring her love for him, buying inappropriate gifts for his son Martin and threatening to tell Pauline unless he tells her first.

In September, under severe pressure, Arthur finally tells Pauline the truth, and tries to tell her that he wants her and not Christine. Hurt, embarrassed and angry, Pauline refuses to listen and throws him out, but not before hitting him on the head with a frying pan. This spells the end for Christine, as Arthur then decides he wants nothing more to do with her, and in October she disappears to face a lonely future, divorced by her husband Greg, and ditched by her lover. 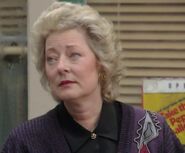