Zulekha Abbasi
Parveen Abbasi
Two Unnamed
Bushra Abbasi made her first appearance 25 May 2009. She is portrayed by Pooja Ghai.

Bushra is married to Nadim and they have 4 daughters Zulekha, Parveen and two unnamed daughters.

Bushra is an old friend of Zainab Masood's. She and Zainab attempt to set Zainab's son Syed up with one of Bushra's three daughters Zulekha. When this fails, they decide to set him up with her fourth daughter Parveen. She requests the services of the Masoods' business, Masala Queen, including for a party on 19 June 2009, where she is impressed with Amira Shah's singing and books them for further events in July.

She is impressed with caterer Christian Clarke and asks if his wife will be joining them at the party. She later tells her friend that she cannot believe Christian is single. When Christian said he just has not found the right man yet, Bushra is disgusted, says "your poor mother", and walks off. She later sees Zainab and her family at mosque and helps Zainab home after she suffers a dizzy spell.

In December 2009, she attends Syed and Amira's Mehndi celebration, and in April 2010, she attends their flat-warming party, where it is revealed that Syed is gay. In May, she and her husband Nadim Abbasi visit Zainab and Masood, and Bushra tells Zainab she must show that she will never approve of Syed in order to be accepted by the community. She attends a meal at the Masoods' in July.

In November, Zainab invites her to visit when she wants to find out some information about Afia Khan and her family. In January 2011, she visits the Masoods when they are opening their new restaurant The Argee Bhajee and bringing Zulekha Abbasi to interview as a waitress. She returns in October 2011, where she finds out Syed and Christian are now living next door to Zainab as a gay couple. She insults the pair and Zainab slaps Bushra, saying she is the sick one and she never wants to see her again.

Bushra returns on 20 February 2014 to visit the Masoods. She is delighted to see Shabnam Masood, but is not very impressed to see Masood or Tamwar. Masood rages at Bushra over her behaviour, and throws her out of the house. Masood later reveals to Tamwar and Shabnam how good it felt to shout at Bushra.

In 2015, Bushra attends Shabnam's engagement party to Kush Kazemi and is shocked to discover that Shabnam had a secret baby with Dean Wicks. She then gossips about the rest of the Masood family to Kush's mother Carmel Kazemi, so Carmel calls her two-faced and threatens to slap her. 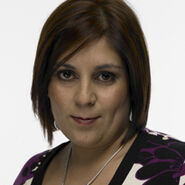 Bushra Abbasi
Add a photo to this gallery
Retrieved from "https://eastenders.fandom.com/wiki/Bushra_Abbasi?oldid=99221"
Community content is available under CC-BY-SA unless otherwise noted.