Various stallholders.
Bridge Street Marketis a number of stalls located in Bridge Street and Turpin Road, the various stalls include Fruit & Veg, Records, Clothes and Flowers. In the 1980's the Market Inspector was a Mr J. Beecham (not seen only mentioned on market regulations poster), In 1996 Michael Rose took over the role. Lisa Shaw was his successor. Later in 2006 Marie Matthews was the Market Inspector for a while.

In April 2014 the Council closed Spring Lane Market and many traders have now moved to Bridge Street Market. The Market Office is located on Victoria Square.

In January 2017, Walford Council has suggest due to Purpose rail links Bridge Street Market may be moved to the Old Flower Market Tipton Street. As 30 January 2017 the covered market is on hold and unlikely to go ahead.

(Note: The the Fruit and Veg stall has been ran by the Beale's from 100 Years.)

(Note:Originally part of the Beale family enterprise, first owned by Lou Beale. Then Mark Fowler bought it from Ian Beale and David Wicks. Later Ian bought it back and ran it before passing it on to this son Peter Beale. Fatboy then ran it for Ian for a while.)

(Cindy Williams's parents ran it, but sold it to Laurie Bates when they left Walford.)

Alfie Moon's Over the Moon Bric-a-Brac

Sweet stall from a Christmas episode. 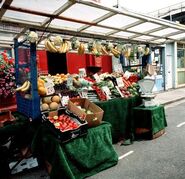 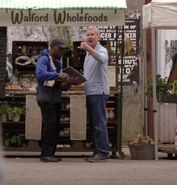 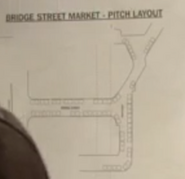 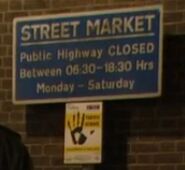 Victorian Christmas Market - Guess the Weight of the Goose! (2015)

Bridge Street Market T-Shirt (19 December 2017)
Add a photo to this gallery
Retrieved from "https://eastenders.fandom.com/wiki/Bridge_Street_Market?oldid=135704"
Community content is available under CC-BY-SA unless otherwise noted.