Bradley Branning was the son of Max Branning and Rachel Branning, and the late husband of Stacey Slater.

Bradley first arrives in Walford and comes to live with Jim Branning and his wife, Dot Branning. He met Stacey Slater and began a relationship with her (after chasing her for a while). His absent father, Max Branning arrives in Walford in 2006 with his wife Tanya Cross and 2 daughters Lauren Branning and Abi Branning. He doesn't recognise Max at first when he first sees him (attacking Jim over how Jim had treated him as a child), but after talking with Max, Max explains that he has moved to the square to get to know Bradley and be his father again. However, unknown to Bradley, Max is lying and actually moved to Walford with his family after Tanya found out he was having an affair, and this was a second chance. Bradley, seeing his father's family across the square, goes over to meet them and introduce himself; however, upon meeting Tanya, she explains that she had no idea about Bradley and Jim living on the square and reveals the real reason for moving there. This leaves Bradley upset, and he storms out branding Max a liar. He is approached by his younger sister, Lauren, who introduces herself and explains she has always wanted a brother, but her mum is making them all move. But after consideration, Tanya changes her mind about moving away from the square and Max and Bradley start again, trying to repair their relationship as they are all I the Branning Family.

Stacey and Bradley are invited to dinner at the Branning's home. However, Stacey walks out halfway and is followed by Bradley. She explains that she is pregnant, leaving Bradley upset and angry as he believes they are too young to have a baby - however, it is revealed that he doesn't want a baby with her because he doesn't want it to affect his new job and what his collegues think of him. He pressures her to have an abortion, which Stacey ends up regretting.

Bradley is invited to a party by his work, but doesn't invite Stacey to be his plus-one. She is upset by this and turns up at the party. She introduces herself as Bradley's girlfriend and is instantly annoyed by how visibly ashamed Bradley is by her. She gets even angrier as he flirts with one of his female collegues. She goes into the toilets to clean up and is followed by one of Bradley's male work collegues who then tries to rape her. She fights him off and goes to find Bradley. She is heartbroken as he doesn't stick up for her, and throws a drink over the woman he has been flirting with all night. He drags her out and dumps her. A distraught Stacey goes back to the square and begins to smash the windshield in of Bradley's car. She is stopped by Max Branning and they end up kissing.

Max and Stacey have an affair, but Stacey stops it when she gets back together with Bradley. They decide to get married, but on their wedding day Stacey and Max kiss and this is filmed by Lauren. When Stacey goes to her family home she is confronted by her brother, Sean Slater, who has discovered Max and Stacey's affair. He beats up Max, but both Max and Stacey explain that they have stopped their affair. Sean says that Stacey must stop the wedding - either she must tell Bradley the truth or he will. But Stacey still goes to get married and bans Sean from attending. Halfway through the ceremony, Stacey sees Sean at the back of the church and gets cold feet, leaving her to walking out. Bradley and Max then try to convince Stacey to marry Bradley but she says she won't. Sean then comes in and convinces her to marry Bradley as he is good for her. Stacey and Bradley then marry.

Stacey and Max's affair is revealed on Christmas day by Lauren Branning after playing the recording of them kissing on Bradley and Stacey's wedding day. Stacey tries to apologise to Tanya but she slaps her, and when she goes to Bradley he chucks her out - ending their marriage.

Bradley meets someone who needs help fixing his car. He drives this man home because his car couldn't start. The man leaves him with a St.Bernards dog called Gumbo. Bradley doesn't like Gumbo at first and tried to get rid of him, but decides to keep him in the end. This leads him to meeting Syd Chambers who owned dog called Sugar. Bradley gets into a relationship with Syd. Bradley ended up loosing his job and was scared if Syd found out that she would dump him. This had the opposite effect and Syd liked that Bradley was honest and kissed him. Whilst at a house party, Bradley and Stacey are locked in a bedroom. She checks the time and goes to take her medication, but Bradley mistakes this for drugs and snatches the pills off her. She then explains that she is bipolar, saying "like mother, like daughter". Syd walks in and is annoyed. Syd and Bradley decide to leave Walford to start a new life together with her son. However, at the leaving party in the Vic, Stacey - who is suffering from a bipolar manic episode - comes in to say goodbye. She breaks a glass and points it at Archie Mitchell, who had raped her and leaves and goes back home. She is sectioned in the street after being chased out of her house by doctors; whilst she is forced into the back of a police car she screams for Bradley. Bradley breaks up with Syd, admitting he still loves Stacey.

Upon Stacey's return to Walford, she and Bradley reconcile and she tells him that she is pregnant. He is overjoyed, thinking the baby is his until she says that she is 3 months pregnant, and the baby cannot be Bradley's. After admitting Archie Mitchell raped her, Bradley vows to raise the child as his own. Bradley then stormed over to the Vic and punched Archie. The next morning, Archie was found dead and Bradley became embroiled in his murder. Archie's daughter Ronnie then tells Stacey that Archie was sterile due to Cancer treatment, making Stacey realise that Whitney Dean's brother Ryan Malloy must be the baby's father.

Bradley then admits he he killed Archie. However, it was in fact Stacey that killed Archie. They remarry and plan to leave the square and go on the run. However, Stacey's friend Becca Swanson calls the police to tell them where Bradley is. They try to flee the Square, but are spotted by DCI Marsden. Attempting to lead the cops away, Bradley scaled the Vic and accidentally fell. He died from his injuries as his wife Stacey Slater admitted to Max that she killed Archie Mitchell. Bradley's funeral took place on 5 March 2010.

In June 2010, Stacey gives birth to a daughter who she names Lily. 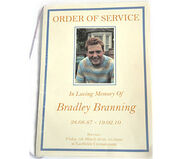 Bradley Branning - Name Card
Add a photo to this gallery
Retrieved from "https://eastenders.fandom.com/wiki/Bradley_Branning?oldid=146873"
Community content is available under CC-BY-SA unless otherwise noted.