Former; recurring
Brad Williams made his first appearance 4 March 1986. He is portrayed by Jonathan Stratt. From 1986 to 1989, he was a henchman for the local crime organisation The Firm.

Brad is a mobster heavy for the East End gangster organization known as The Firm. He is quite camp and charismatic and of low importance within the organization and is generally used as an errand boy. He is first seen in March 1986 and over the next two years he appears occasionally to inform Den Watts of his bosses' orders. Den works in league with the Firm on a variety of dodgy dealings. One time he and a henchman beat up Tony Carpenter for attacking Beresford, the leader of the gang targeting multi racial tradespeople, himself being multi racial and a former victim of racism.

Towards the end of 1987 Brad is instructed to scare graphic designer, Colin Russell, who is a jury member in a trial for an associate of the Firm. Brad and Den put pressure on Colin to give a verdict of 'not guilty' at the trial, and when he refuses Brad steals his keys and vandalizes his flat, causing all sorts of problems for Colin.

During 1988 Brad is seen more frequently, turning up to aid the running of the Firm's business in Walford, Strokes winebar, which is being managed by Den and is really a front for an illegal gambling den. The petty criminal Darren Roberts manages to get on the wrong side of Brad when he tries to play him off against the owner of The Dagmar, James Willmott-Brown. The Firm's money lending business, 'Walford Investments', are in the process of securing the takeover of James' ailing winebar, albeit against his wishes. Darren, sensing an opportunity, promises to provide James protection against the Firm, whilst all the while attempting to get onto the Firm's payroll via Brad. Incensed by Darren's audacity, Brad takes him aside and gives him a severe beating, and Darren leaves Walford shortly after.

In July 1988, Den discovers Kathy Beale after she had been raped by James Willmott-Brown, and instantly seeks revenge. He demands retribution from his contacts within the Firm, Brad and Joanne Francis, and is enraged when they refused to act. Den manages to persuade Brad to help him anyway by conning him into thinking that James' downfall will please his bosses and Den watches with glee as the Dagmar burns down in flames. However the resulting police investigation puts the Firm's business in serious jeopardy. They then decide that in order to put a halt to the investigation either Brad or Den have to take the blame for the arson attack. Neither Brad nor Den is willing to take the blame, and both are then involved in a personal war to persuade the other to take the rap.

Brad immediately calls on the services of Rod Norman, via threats, and forces him to give the police a tip off about Den. The police begin questioning Den and realising that he has gotten in way over his head, he decides that he will accept the blame for the arson, but instead of serving time in prison, he decides to flee the country to avoid arrest. The Firm agree to this and Den is taken into hiding. However the Firm subsequently set up a hit on Den, which fails when he escapes from hiding and turns himself into the police to avoid the Firm's heavies.

As the Firm busy themselves with ways in which to silence Den from inside, Brad causes more grief by doing a bit of moonlighting; breaking into several people's houses on the Square with an accomplice who works as a cab driver for Ali Osman. The burglaries result in a greater police presence in the area. The Firm are not impressed and Gregory Mantel — a superior member of the Firm — threatens Brad with serious repercussions should his deviance continue. Brad stops the burglaries, but his accomplice continues without him and is eventually caught by the police and is quick to implicate Brad. The investigating officer, D.I. Ashley, decides to use this piece of information to manipulate the dimwitted Brad. He threatens to put him in prison unless he acts as an informant. Brad is forced to relay information on The Firm. Strokes is closed down as a result and various members of the Firm are arrested. With the Firm under threat from the police, Gregory Mantel decides that Den has to be the informant and makes arrangements to have him eliminated.

On the day of Den's trial, Mantel's heavies break Den out of custody and take him to the Firm's headquarters, where he is greeted by Brad. Brad imprisons him in a room to await the arrival of Mantel. However, Den is not about to go down without a fight and knowing how easily influenced Brad is, he makes one last attempt to secure his freedom. He plays upon Brad's fears, relaying that he had heard that Brad is to be the next victim on the Firm's hit-list. Brad is easily swayed and he decides to help Den escape. He lures the other gang member, Marco, into the cell where an awaiting Den jumps him and throws him to the floor, whilst Brad locks him up in Den's place. The two then escape from the headquarters, and Brad speeds off in his car, leaving Den to fend for himself.

Brad immediately goes to the police and hands himself in. He promises to confess everything he knows regarding the arson, Den, and the Firm. Meanwhile, Mantel, who is furious with Brad's betrayal, tracks Den down, he is shot and presumed dead for over 14 years. However he returns to Walford in 2003, revealing that he had faked his own death to secure his survival. It is also revealed that a man named Brad has been charged for the arson attack of the Dagmar. Subsequently, Den is no longer wanted by the police. Brad has not returned to Walford since 1989 and his current whereabouts are therefore unknown. 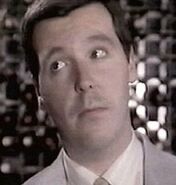 Brad Williams
Add a photo to this gallery
Retrieved from "https://eastenders.fandom.com/wiki/Brad_Williams?oldid=172021"
Community content is available under CC-BY-SA unless otherwise noted.