Former; recurring
Robert "Bob" Lister is the former market inspector for Walford's Bridge Street market for over five years. He is played by Nick Wilton.

In his first appearance, Lister sacks his assistant, Bradley Branning. He appears on a recurring basis thereafter, his next appearance being when Tamwar Masood seeks approval for a new stall, which Lister accepts. In August 2008, Billy Mitchell gets a job as the market cleaner but Lister sacks him when he loses his cart. In October 2008, Ronnie Mitchell phones him because Danielle Jones is selling stolen nightwear on the clothes stall. In May 2009, Lister closes down Stacey Slater's stall and in September that year, he closes it again and gives it to Ryan Malloy. In February 2010, Stacey and her friend Becca Swanson decide to set up a stall but Lister turns them down as he does not like Stacey. Becca dresses up and pretends to be from Walford Council and tells Lister that Stacey has lodged a complaint against him and makes legal threats. Lister then gives Stacey her stall.

In April 2010, Lister is seen investigating Arthur Chubb's van, as Fatboy is trying to sell T-shirts from the vehicle without a market license. In May 2010, Syed Masood asks Lister if he can start a market stall, and Lister suggests a mobile phone stall, whilst having a drink with Syed, Roxy Mitchell refuses to serve Syed, Lister interprets this as racism. In October 2010, Kat Moon squirts water at him, so he orders Stacey to discipline or sack Kat, but Stacey refuses and squirts him as well, so he revokes Stacey's market traders' licence. In March 2011, Lister offers Fatboy a month's trial on his own stall after Fatboy and Mo Harris argue over it.

In April 2011, he complains to Billy that his stall is in the wrong position, but Billy says nobody cares. Whitney Dean asks for her stall back, and they get chatting. He moans about his life as he gets abused by stallholders regularly, and his wife has left him so he rarely sees his two children. He then invites Whitney for a drink and comforts her saying that her stepfather, Ricky Butcher, is doing what is best for her. Lister gets up to leave but falls onto Whitney, so Janine Butcher threatens him and calls him a pervert. In May, Denise Fox asks Lister to get involved with Patrick Trueman but Lister says he has no say over the shop, which Patrick owns. In June, Whitney and Lauren Branning ask Lister for a stall, but he is reluctant as Whitney lost a stall for not paying her rent. However, he agrees as long as the owed rent is paid and a month's rent is paid in advance. In July, Lister issues Fatboy with a warning for kicking his own stall, but Fatboy decides to abandon his stall before he can be disciplined. He warns Eddie Moon about fly tipping, and is threatened by Eddie's son Tyler Moon. Lister later accepts a bribe from Eddie. In November, Lister appears following reports that someone is selling Dutch Father Christmas toys, and asks Alfie Moon if he knows anything. Alfie denies this, although it is his relatives Tyler and Anthony Moon who have done it. Anthony asks Fatboy to change them so they no longer speak Dutch, and when Lister sees Fatboy with one, it plays a jingle in Fatboy's voice.

In April 2012, Lister complains to Bianca Butcher that the rubbish from the café is overspilling into the market, so she angrily empties the rubbish into the street. A few days later, Bianca attempts to steal a handbag belonging to a market seller. She is caught and in the struggle, Lister is injured after Bianca hits him. He calls the police, resulting in Bianca's arrest and imprisonment. It later emerges that he has taken out a restraining order against Bianca, meaning that she cannot go to the market or Bridge Street. In September, Lister threatens to call the police on Shirley Carter, who is lying drunk in the street. Later that month, he reprimands Syed for not selling his usual stock. In November, Lister accuses Cora Cross of stealing a bag that he donated to the charity shop she manages. This leads to Cora being fired. Lister goes to the salon for a haircut, where Bianca gives him a shampoo. It is awkward at first, but then they start to bond when they talk about their children, as Lister's daughter is getting married and he thinks he will feel left out at the wedding. Lister agrees to have the restraining order dropped and gives Bianca a £5 tip, accidentally leaving £20 behind. He later accuses Bianca of stealing it, but when it is found, he apologises and gives her the money. In April 2013 Lister temporarily bans Bianca and Kat from trading on the market after they play various pranks on him. Kat pretends to seduce Lister and Bianca takes a photo of him with his trousers down, which they use to blackmail him to get their stall back. In June, Lister speaks to Ian Beale about his new restaurant and introduces him to Danny Pennant. Ian hopes that Danny will find someone to invest in his new business. After Lister loses his job, he is replaced by Aleks Shirovs. after apparently being given a promotion from the council.

In August 2016, Mr Lister interviews Carmel Kazemi for the market inspector position. In July 2017, Mr Lister has a meeting with new Market Inspector Robbie Jackson to discuss 'big changes' to the market and orders Robbie that he has until Christmas to eject Donna Yates from the market. 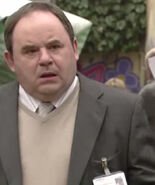 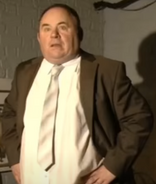 Bob Lister
Add a photo to this gallery

Retrieved from "https://eastenders.fandom.com/wiki/Bob_Lister?oldid=177807"
Community content is available under CC-BY-SA unless otherwise noted.