Wellard
Bianca Jackson (previously Butcher, also Branning) is the daughter of Carol Jackson and David Wicks, half-sister of Robbie, Joe, Karen, Sonia and Billie. She is the mother of Liam, Tiffany and Morgan, as well as the adoptive mother of Whitney. She is the ex-wife of Ricky Butcher.

Bianca arrives with her family, mother Carol, Carol's partner Alan, and her half-siblings Robbie, Sonia and Billie. She initially works at her uncle Ian Beale's fish and chip shop, before becoming the market assistant of Sanjay Kapoor. Later she runs her own clothing stall on Bridge Street market. Bianca has a short relationship with an older man, Richard Cole, but he swiftly dumps her when he grows bored and Bianca gets revenge by harassing him with pranks and stealing his credit card. David Wicks then enjoys mutual flirtation with Bianca until Carol informs David that Bianca is his daughter. Horrified, David promptly keeps his distance, and Bianca remains unaware of their biological relationship. Bianca enters into a relationship with Ricky Butcher and they move into a bedsit together. Bianca spends much time clubbing with her childhood friend Tiffany Raymond and Ricky starts an affair with Bianca's other childhood friend, Natalie Price. When Bianca discovers the affair, she breaks up with Ricky and drives Natalie from Walford. One night, an intoxicated Bianca is nearly assaulted. She is rescued by David and when she tries to kiss him, he confesses that he is her father. Bianca is left stunned and humiliated. Initially she feels hostile and resentful over David's absence for the majority of her life. Eventually, Bianca has a change of heart and comes to accept David as her father, becoming keen to bond with him. The relationship is further complicated, when during July 1995, David confides in the Samaritans charity that he still feels sexually attracted to Bianca, despite the knowledge that he is her biological father. A case of GSA, this was one of EastEnders' most controversial and daring storylines at this point in the show's history. There is further tension when Bianca makes David uncomfortable by reconciling with and dating his stepbrother Ricky again. Bianca is confused by David's unexplained strange and occasionally hostile behaviour. David never admits to Bianca the truth behind his initial feelings towards her, but she and David eventually bond naturally as a father and daughter.

Ricky and Bianca reunite and get engaged but she has sex with Lenny Wallace, but soon regrets it when she fears she is pregnant by him. It's a false alarm, but she realises how much Ricky means to her, so she marries him. She becomes pregnant, but a prenatal scan shows her unborn child has spina bifida and hydrocephalus. Distraught, Bianca has an abortion, which strains her marriage. Ricky learns of her infidelity with Lenny after a STD scare. Ricky considers ending their marriage, but Bianca convinces him to give her another chance and she becomes pregnant again. She gives birth to baby Liam on Christmas Day in The Queen Victoria public house, helped by her enemy Grant Mitchell, her best friend Tiffany's volatile husband. Carol returns to Albert Square with her new fiancé Dan Sullivan, unaware that Bianca had a past relationship with him when she was underage. Bianca and Dan rekindle their affair behind Carol and Ricky's backs, until Carol discovers she is pregnant by Dan. Bianca and Ricky plan to move to Manchester so Bianca can attend fashion college there. After finding an old photo of Bianca and Dan together, Carol demands to know their history. Dan tells Carol they had a romance years ago and swears on his unborn child's life that it's all over, but Bianca confesses when questioned and is disowned by Carol. Bianca leaves for Manchester after confessing to Ricky that she no longer loves him.

Bianca is evicted from her home and her children are taken into care. Bianca moves in with her grandmother Pat Evans (Pam St Clement) in Walford and with Ricky's help, she gets her children back and a waitress job. She rebuffs Ricky's declaration of love, deciding to stand by imprisoned lover Tony. When he is released, Tony resumes his affair with Whitney while Bianca wants to set a date for their wedding. He eventually agrees after winding down his affair with Whitney, to whom he is no longer attracted. Whitney tells Bianca about their relationship, just as she thinks that she and Tony will run away together. There is a massive row and Tony leaves but he is arrested by the police on suspicion of rape of a minor. Bianca and Whitney's relationship is tested while they deal with what has happened but they eventually bond again and Bianca supports Whitney through Tony's trial.

A DNA paternity test, confirms that Ricky is Tiffany's father. Bianca slowly realises she is in love with him, but her attempt to rekindle their romance is ruined when Ricky announces his engagement to Sam Mitchell. Knowing Sam is evading a prison sentence, Bianca reports her whereabouts and Sam is arrested. A rift forms between Bianca and Ricky when the truth is revealed. However, Bianca's discovery that Sam is cheating on Ricky ends the engagement and Bianca and Ricky reunite, when Ricky accepts her marriage proposal. The couple remarry. During the ceremony, Carol arrives and brawls with Bianca but they settle their differences and begin to rebuild their relationship. When Bianca's younger brother, Billie, dies from alcohol poisoning, Carol is distraught. She is comforted by Billie's friend, Connor Stanley, and they begin an affair, while Connor is also dating Whitney. Bianca vows to remove Connor from her family's life and attacks Connor, leaving him hospitalised and eventually turns herself in to the police, refusing bail. She is sentenced to six months imprisonment. Bianca is released for Christmas and is devastated when Pat dies from pancreatic cancer. When Bianca discovers Ricky had sex with Mandy Salter in her absence, they separate and he leaves Walford. Bianca struggles as a single parent and gets into debt. Owing money, Bianca steals from a market trader in desperation, but she is caught and sent back to prison. In prison, she passes a hair and beauty course and on her release, is offered a trial at Tanya Cross's salon. However, Bianca struggles to cope and breaks down when she is alone.

Bianca and Kat Moon form a friendship and set up a market stall together. Liam plays truant from school and Bianca worries when the police tell her she may face prison again if Liam does not return. Bianca discovers that Liam is involved in a mugging and that he has some dubious new friends. When Liam does not come home, she goes to an estate to confront the gang and collect Liam but he decides to stay with the gang and when he does come home, Bianca locks him in his room to stop him seeing the gang. She seeks advice from Ava Hartman, whose son Dexter used to be in a gang. Liam returns to the gang and eventually they are arrested and released on police bail. They blame Liam and he is stabbed but is not seriously injured. When Bianca lets Liam stay at home alone, Kane sneaks in and invites Liam back to the gang. Bianca finds them as Kane is attacking Liam and attacks Kane; he is arrested. Bianca allows Liam to stay with his father. When Bianca, Shirley Carter and Jean Slater break into Ian's restaurant, Shirley accidentally starts a fire. Bianca worries that she could go back to prison, and tells Whitney, who has been blamed for it. Jean tells Ian what happened and Ian agrees not to involve the police on the condition that Tiffany and Bobby are no longer friends.

When Carol sees that Bianca is still interested in fashion, she arranges for her to attend a course in Manchester. During this time Bianca's father, David, returns and moves in. When Bianca returns, she surprises her family by announcing that her new boyfriend, Terry Spraggan, and his children, TJ and Rosie, are moving in. Bianca is devastated when Carol learns that she has breast cancer. Carol and David get engaged and Bianca learns that she has not inherited Carol's faulty cancer gene and supports her mother throughout her cancer. She ends her relationship with Terry due to the jealousy of his former wife, Nikki Spraggan, and David leaves before marrying Carol. Bianca and Terry continue their relationship in secret and she learns that he is planning to move out of London. Terry and Bianca reunite, and at the last minute, Bianca gives Liam and Whitney her blessing to stay with Carol before taking Tiffany and Morgan to live in Milton Keynes.

The following year in 2015, Robbie returns and later moves with his son Sami Jackson to Milton Keynes with Bianca. In 2016, Bianca is invited to Whitney's wedding to Lee Carter, however, she cannot attend and Tiffany and Morgan attend instead. Whitney also stays with Bianca when her engagement with Woody Woodward ends in 2017. Robbie and Tiffany both later return to Walford – Tiffany returns in 2018, revealing that Bianca had attempted to kill herself. However, Tiffany is lying and it is revealed that Tiffany felt neglected by Bianca and Terry so decided to come to stay in Walford. Bianca agrees for Tiffany to stay in Walford with Whitney. Sonia calls Bianca to tell her about Tiffany's involvement in a drug ring, however Bianca is unable to come to Walford.

The following year, Bianca returns to Walford for Whitney's wedding to Callum "Halfway" Highway and wakes up in a police cell with Kat after a night out. Bianca mentions she has recently been released from a third spell in prison. When Ben Mitchell arrives at the venue and reveals the truth about his affair with Halfway, Bianca threatens him. She then tries to discourage Whitney from marrying Halfway but Whitney, albeit doubtful, is determined. Whilst at the wedding reception, Bianca witnesses a man giving Tiffany a kiss on the cheek and threatens him to stay away. She attempts to make amends with Tiffany, who is upset with her for her absence. When Bianca sees Whitney getting drunk at The Queen Vic, she suggests that she attends her honeymoon alone to take her mind off Halfway and Bianca also plans a spa day with Tiffany. Bianca once again comes across the man she saw at the wedding and he is revealed as Leo, the son of Bianca's ex-boyfriend and Whitney’s abuser and rapist Tony. He begins menacing Bianca for money that his grandmother had left to him and threatens to hurt Whitney and Tiffany if he does not get the money.

After spending the afternoon getting drunk with Sonia and Robbie, Bianca leaves Walford once again to go on holiday with Tiffany for a few days. As she leaves Walford, Leo is seen staring at her taxi as she leaves the Square.

1. Wellard (August 2008) - Euthanised after being fed chocolate by Bianca. 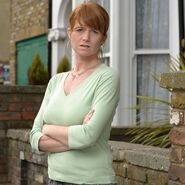 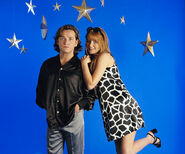 Bianca Jackson - Name Card
Add a photo to this gallery
Retrieved from "https://eastenders.fandom.com/wiki/Bianca_Jackson?oldid=221945"
Community content is available under CC-BY-SA unless otherwise noted.