Bernadette came to live in Walford in 2017 with her mother Karen Taylor and siblings Keanu Taylor, Keegan Baker, Chatham Taylor and Riley Taylor.

Bernadette began a relationship with fellow student Callum, which made her fall pregnant with his daughter, whom the pair decided to name Belle. Bernadette started to have a craving for cheese, and onion crisps and Karen noticed this and confronted Bernadette about how many months pregnant she was. Karen and Bernadette went out shopping to find clothes for the baby, and the whole family was excited. Still, a couple of weeks after, Bernadette began to have pains in her stomach - this led to her giving birth to a stillborn baby girl, and she was heartbroken that her baby wasn't moving or breathing at all and was so tiny. Bernadette's mother had organised for the baby to be cremated.

A couple of days later, Bernadette had a ceremony at the Allotment to remember her baby alongside Callum, Karen, and her brothers Keanu Taylor and Keegan Butcher-Baker. Keegan then went to punch Callum, but Keanu stopped him, and Keegan cried and said he could've helped the baby. Callum and Bernadette then revealed that they had already picked out a name for the baby, which was Belle and everyone remembered the baby as "Belle Taylor". At school, Keegan gets mad when everyone thinks he won't do well in his test, so he throws a brick through a teachers car - Bernadette takes the blame for him so he can do his test. Due to her doing this, she got suspended from school.

On Halloween, Louise Mitchell and Bex Fowler are forced to include Bernadette in their plans for a Halloween party - which they are not happy about but went along with it because she is Keegan's sister. Keegan freaks Louise out by using a scar covered mask and Louise's boyfriend Travis Law-Hughes goes mad. Bernadette then began to play chess with Ted Murray. Keegan teased Bernadette about this over and over again - especially when she started a chess club at school, which no one attended. Bernadette began to win many tournaments, and it became a hobby, but Karen thinks Ted is "touching" Bernadette. However, she later apologises. She then befriends Tiffany Butcher who tells Bernadette that her 'cousin' (actually aunt) Abi Branning has just died (life support was withdrawn). Bernadette tells Tiffany that she had a baby who died.

When Karen tells Sharon Watts that she thinks Ted is "touching" Bernadette, she invites Bex and Tiffany round to take her out the house for a bit to get her mind off chess, but she refers to them as "the ginger one and the one with the annoying mother". When Bex leaves the room, Tiffany then tells Bernadette that she doesn't talk much and Bernadette replies " it's hard to get a word in over you two". Tiffany then tells Bernadette that Bex is her cousin and she's forced to like her - which makes Bernadette laugh. Louise then arrives and brings a doll so Bernadette can "point" to where Ted has touched her. Bex and Tiffany look at each other, and Bernadette leaves the room. When Louise asks Bernadette where she is going, she replies to the toilet, or do I have to ask your permission to go there an all. In April 2018, Tiffany's sister Whitney Dean wanted to send Tiffany back home to live with her mother Bianca Jackson as she is too much to handle. Still, Bernadette manages to talk Whitney round into letting Tiffany stay, and the pair say nothing can get in between them even though Bernadette's brother Keegan and Tiffany fancy each other.

In May 2018, Bernadette's friend Shakil Kazemi died- following a knife attack. Keegan was also stabbed but survived. Flowers and cards are placed on a bench near where Shakil was found in the memory of him were Keegan, Bex, Louise, Tiffany, Bernadette and Louise's boyfriend Hunter gather round and remember Shakil. Keegan becomes upset, but Bernadette tells him it wasn't his fault. Keegan tells the group that Shakil wouldn't have wanted flowers or cards - he would have liked a good party. Hunter tells them he has spare keys to E20 which his mum runs and teens get drunk and play truth or dare. They spin a bottle, and it lands Tiffany kissing Bernadette. Tiffany tells the group that she isn't kissing Bernadette, but Hunter dares her to do it. So Tiffany kisses Bernadette, leaving everyone gobsmacked and she replies " hash tag, never dare a Butcher". Keegan then grabs the bottle and spins it around, hoping it will land on him so he can kiss Tiffany. It lands on Keegan, and he leans in to kiss Tiffany, the pair snog and smile at each other, but Bernadette doesn't like the thought of her best friend and her brother kissing. Louise also appears to be jealous even though she is going out with Hunter. After that, everyone makes a toast to Shakil. The next morning, Tiffany thinks that she is ill, but Bernadette replies "its called a hangover". 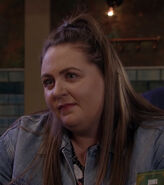