Musty
Bernadette Logan made her first appearance on 10 December 2007. She is portrayed by Olive Gray.

Bernadette is a pupil in Abi Branning and Ben Mitchell's school year. She is first seen when she takes part in Dot Branning and Yolande Trueman's 2007 nativity play. Abi is jealous of her as Bernadette is playing Mary. After Abi tries to sabotage Bernadette to gain the role of Mary, she is demoted from narrator to the role of the donkey.

Bernadette later appears at Abi's twelfth birthday party in June 2008, when she teases Abi about having a childish party, but they later become friends. In September 2008, Abi tells her father Max that she'd confided in Bernadette about her mother Tanya 's relationship with Max's brother Jack, and Bernadette had been calling Tanya a "scrubber". Max tells Abi to stand up to Bernadette, and it is revealed that Abi had assaulted Bernadette (off-screen) and been suspended from school for four days.

In 2008 Bernadette and her family moved away and Abi asked her to take care of the cat Musty for her.

In July 2011, Abi is seen talking on the phone to Bernadette about dumping someone.

In 2013 Abi lies about being at Bernadette's house in order to cover up her and Jay Brown sleeping together. 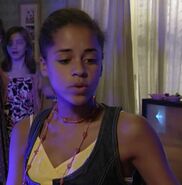 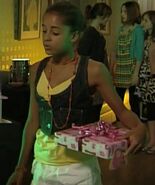 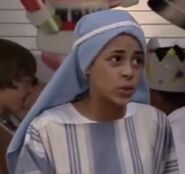 Bernadette as Mary at the nativity play
Add a photo to this gallery
Retrieved from "https://eastenders.fandom.com/wiki/Bernadette_Logan?oldid=187239"
Community content is available under CC-BY-SA unless otherwise noted.