Barry Clark made his first appearance 18 November 1986. He is portrayed by Gary Hailes.

Barry is a cockney barrow-boy, and an unlikely partner for the gay, middle classed yuppie, Colin Russell. He is much younger than his middle-aged boyfriend and as such Colin's role is almost paternal. Barry is open about his sexuality to everyone except his volatile father — and when he is finally told he takes the news so badly that Barry turns straight just to appease him — although he is never very successful at it.

Barry appears in November 1986 as a love interest for graphic designer, Colin Russell. Barry works on Bridge Street Market, selling records and other paraphernalia. His family has a reputation for being thuggish; Barry keeps his homosexuality a secret from them, fearing his father's reaction.

Personality differences between Barry and Colin causes friction in their relationship. Having been imprisoned in 1983 for motor theft, Barry gets involved in crime again in 1986 under Nick Cotton's influence. This goes against Colin's morals and he is invariably left to clean up Barry's blunders. When Dot Cotton discovers Colin and Barry are in a relationship, she worries they will infect her with AIDS. Her rumours evoke hostility from some members of the community but gradually, they get used to the idea of having gay neighbours and Barry is relieved when his older brother, Graham Clark, gives his blessing too.

Differences between Colin and Barry become too great to overcome; Barry's inconsiderate behaviour exasperates Colin and their age gap causes further problems when the police discover that Barry had been under the legal age of sexual consent for homosexuals (21 at the time) when he began living with Colin. The police decide it is their duty to inform Barry's parents. Petrified of his homophobic father, Barry ultimately decides to end his relationship with Colin on New Year's Eve 1987.

To prevent his father disowning him, Barry attempts to live a heterosexual existence and begins dating a girl named Judy, to Colin's dismay. He sets up a mobile disco with Ian Beale, purchasing the equipment from a petty criminal named Darren Roberts. However, the equipment turns out to be borrowed via Hire Purchase, and when the repayments are not made, the finance company repossesses it all. When Barry is evicted from his flat, he decides to take a job as a DJ on a cruise liner in July 1988. Colin is saddened to see him leave. Barry returns briefly in February 1989 on the day that Colin leaves Walford. Colin departs saying a particularly heartfelt goodbye to Barry. 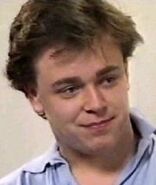 Colin Russell's Drawing of Barry Clark
(14 January 1988)
Add a photo to this gallery
Retrieved from "https://eastenders.fandom.com/wiki/Barry_Clark?oldid=172761"
Community content is available under CC-BY-SA unless otherwise noted.