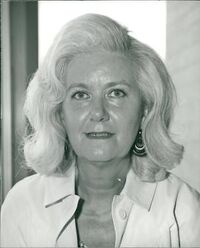 Barbara was an established face to television viewers in varied roles such as the unkempt grandmother in successful ITV comedy The Grimleys and the glamorous Lilly Mattock in EastEnders.

After the war, she trained at the Birmingham School of Speech and Drama and then the London Academy of Music and Dramatic Art. Like many of her contemporaries she went into weekly repertory, an experience she valued for the beautiful variety of roles she played, which included characters such as Mrs Malaprop in The Rivals and Mrs Danvers in Rebecca. At Kidderminster Repertory Theatre she acted alongside John Osborne and Ronnie Barker, who she was to work with later in Open All Hours and The Two Ronnies. There followed a tour of Teahouse of the August Moon with Bill Kerr.

From the late fifties to the seventies Barbara was a regular on television, making guest appearances on Dixon of Dock Green, Z Cars, Crossroads, the Sweeney, Coronation Street and The Newcomers. She also featured in the groundbreaking On Giant's Shoulders with Dame Judi Dench.

Alongside her television career, her stage career flourished. She performed in No One Was Saved with a young Maureen Lipman at the Royal Court and with David Hemmings in Adventures of the Skin Trade at the then newly established Hampstead Theatre. She also played at the Royal National Theatre in three productions - John Gabriel Borkman with Sir Ralph Richardson and Peggy Ashcroft, Plunder with Dinsdale Landen and Frank Finlay and Engaged with Jonathan Pryce. Throughout the eighties and nineties, career went strength to strength. On stage, she worked Bob Hoskins and Helen Mirren in Adrian production of The Duchess of Malfi and toured in Alan Sisterly Feelings with Peter Sallis, Trudie Styler, Tessa and the late Bryan Pringle. On television, she also worked with the legendary Alan Clarke in his of Jim Road ( 1987). She also starred on the big screen, most notably in Tai-Pan, The Virgin Soldiers, Princess Caraboo with Kevin Kline and cult classic The Abominable Dr Phibes, playing ’housekeeper. It is a testament to Barbara that she was still working only four days before she died. She had recently filmed an episode of Little Britain, which she was thrilled to be asked back to work on, after enjoying herself immensely as Marjorie mother in the first series. Nobody will forget her as an actress of high, a consummate and a lady with integrity, kindness and a wonderful sense of humour.

Retrieved from "https://eastenders.fandom.com/wiki/Barbara_Keogh?oldid=149352"
Community content is available under CC-BY-SA unless otherwise noted.