Former; recurring
Asif Malik made his first appearance on 21 September 1999. He is portrayed by Ashvin Luximon.

Asif Malik is a school friend of Martin Fowler. Together they get into lots of trouble such as shoplifting and vandalism, but almost always when Martin is caught, Asif leaves him behind to explain himself to his mother Pauline Fowler. His own family are never seen on-screen but are mentioned occasionally.

He rarely has storylines which centre only on him and nearly all his storylines are linked with Martin or with his fellow schoolmates Nicky di Marco and Janine Butcher. He goes on a few dates with Nicky but it doesn't turn into anything serious. He also has a crush on Janine which is not reciprocated.

While Asif and Nicky are in a relationship, in November 1999, Nicky is upset with Asif after Janine tells her that Asif said she put out for him. Nicky confronts Asif at Kathy's Café, but is upset to see him flirting with Janine. She then takes Sonia Fowler's advice and dumps him.

Asif goes on a trip with Martin to West London, in September 2001, and meets Kirsty, a blonde university student working as a cafe waitress. Asif and Kirsty take an interest in each other, while her gay friend Craig takes an interest in Martin, so Kirsty and Craig invite them to a uni party. However, a stalker follows Kirsty to the party, but the stalker leaves after being confronted by Asif. Kirsty and Asif then spend the night together and have sex. The following morning, Kirsty tells Asif it was just a one-night stand and she has no interest in a serious relationship, after which a disappointed Asif returns to the East End with Martin.

He is last seen in October 2003 when he passes his A-levels and goes to university. He has not appeared since. It is revealed in 2004 that Asif is living in Edinburgh and is getting married; he invites Martin to his stag party off-screen. 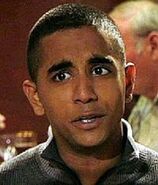 Asif Malik
Add a photo to this gallery
Retrieved from "https://eastenders.fandom.com/wiki/Asif_Malik?oldid=144194"
Community content is available under CC-BY-SA unless otherwise noted.