Matthew Mitchell-Cotton
Ashley Cotton made his first appearance on 29 July 1993. He is portrayed by Rossi Higgins (1993) and Frankie Fitzgerald (2000–01). He was the son of Nick Cotton and Zoe Newton. He dies after getting into a motorbike crash in a bike tampered with by his father Nick.

Ashley Cotton was born in August 1983, He grew up never getting to meet or knew his mother Zoe Newton's parents, due to a family fall out, over the fact that she ended up in an relationship with Nick Cotton, when she was still under age, which her parents were not happy about, and they never liked Nick either.

Zoe became pregnant with her and Nick's son Ashley, and gave birth to him when she was just 15 years old, with Nick not being around for the birth of son, and to support her, when Ashley was born, because he was all the way, in at a pub, a cross London, which Nick claimed, he was out celebrating, and it got out of hand.

And all of Ashley's life, Nick was never a good father to him, and has always let Ashley down, by never phoning, nor writings to him, with Ashley only ever wanting was Nick's approval as a father.

Ashley first appears in Walford along with his mother Zoe Cotton in 1993, at the age of nine. He meets and becomes close to his grandmother, Dot Cotton, who later leaves the square with him, Zoe and Nick to live in Gravesend. Dot leaves Gravesend and returns to Albert Square in 1997 without Ashley or his parents and reveals that Ashley and Zoe have moved away to get away from Nick.

Ashley returns to Albert Square briefly in July 2000 to visit Dot for a few days. It is obvious he has taken after his father when he gets up to mischief. Nick is later released from prison and reunites with Ashley and Zoe in the special spin-off episode titled "The Return of Nick Cotton" which aired on October 1, 2000. Ashley wants to live with Nick despite Zoe's reluctance so he and Nick gets into a car and decides to travel before returning to Walford. When they return to Walford and settle in with Dot, Ashley is under the influence of his villainous father Nick and starts taking drugs and gets involved in robberies with Nick. After a series of arguments with both sides of his family, he drifts between each of his parents until a fateful summer evening in June 2001. He steals Mark Fowler's motorbike after an argument in The Queen Victoria, unaware that his father has cut the bike's brakes in hope of killing Mark. Nick, Pauline Fowler and Dot shouts at Ashley to stop but he couldn't stop the bike until he comes face-to-face with a pedestrian. Ashley swerves to avoid the pedestrian and brakes sharply, but the motorbike flips over a pavement and Ashley crashes into the laundrette. 17-year-old Ashley dies instantly and Nick is riddled with guilt. Dot later overhears an argument between Mark Fowler and Nick, discovers that Nick is responsible for Ashley's death. After Ashley's funeral, Dot confronts Nick and throws him out of the house. 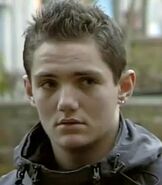 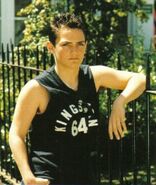 Ashley Cotton - Name Card
Add a photo to this gallery
Retrieved from "https://eastenders.fandom.com/wiki/Ashley_Cotton?oldid=208198"
Community content is available under CC-BY-SA unless otherwise noted.