When Ash was 19, Ash had an abortion. Ash met Iqra and had been in a relationship with her for over a year before coming to Walford. Ash's identity was kept a secret due to Iqra being entered into an arranged marriage with a man.

Ash is introduced as the bisexual Sikh girlfriend of Iqra Ahmed, who made an appearance to give Iqra emotional support when she told her grandparents that she isn’t straight.

In August 2019, Iqra introduces Ash to Arshad and Mariam Ahmed, where she explains that Ash is a doctor. When the pair are in the club, Iqra introduces Ash as a friend which bothers Ash. When she brings up her annoyance with it, Iqra pulls her into a kiss in front of the Walford residents. In October 2019, it is revealed that Ash is the sister of Kheerat, Jags and Vinny Panesar. Vinny tells Ash that their mother is dying from cancer, to which she refuses to visit her. It is then revealed that when she was 19, Ash had an abortion which Kheerat disagrees with. As part of a "wife swap" event, Ash stays with Honey Mitchell for a few days. During her time there, she notices that Honey has an eating disorder, and encourages to get professional help. She later witnesses Honey throw Adam out, who is revealed to have known about her eating disorder but didn't care. Ash stops Iqra from getting involved, and the pair cheer for Honey for standing up for herself when she confronts Adam. When Kheerat, Jags and Vinny move into a house in Walford, Kheerat tries to make amends with Ash. He apologises for disagreeing with her abortion, but when she introduces him to Iqra, he disapproves of Ash dating a Muslim. 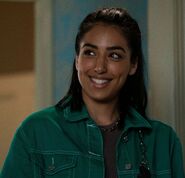 Ash with her former girlfriend Iqra

Ash and Iqra
Add a photo to this gallery
Retrieved from "https://eastenders.fandom.com/wiki/Ash_Kaur?oldid=208718"
Community content is available under CC-BY-SA unless otherwise noted.