April is the daughter of Jim and Reenie Branning, and the sister of Carol, Suzy, Derek, Max and Jack. She was mentioned 20 April 2015 by Carol Jackson when Max Branning asks why she brought so much food and wine for Jim Branning's funeral, Carol replying "If April turns up with her lot".

April arrives in Albert Square in December 1995 to invite Carol and her boyfriend Alan Jackson to her wedding. April had been living and working in Greece for eight years selling time-share apartments, where she met and got engaged to a native named Nikos. Carol initially refuses the invitation as she knows that her black boyfriend will not be well received by her racist father, Jim Branning. However, Alan decides that he wants to go so April enlists her niece Sonia Jackson as bridesmaid.

The ceremony is due to take place in April 1996 but just at the last minute the groom's best man turns up with the news that Nikos has fled back to Greece, leaving April distraught and humiliated. The day isn't a complete waste though as Alan and Carol get married in their place.

April returns to Walford in July to visit her sister, and after meeting the market inspector Michael Rose, to whom she is attracted to, she decides to stay. She gets herself a job working in Kathy Beale's café, where she is witness to her brother-in-law's flirtations with the vindictive Frankie Pierre. When it becomes obvious that Frankie is involved with Alan, April informs Carol, which eventually leads to the end of Alan and Carol's relationship.

April and Michael's relationship continues over the next few months and eventually Michael falls in love and begs April to move in with him. April is unsure whether she wants to take such a big step, and while she is considering what to do, her ex, Nikos, shows up and tries to worm his way back into her affections. He demands to marry her and despite the fact that he had previously jilted her at the altar, April decides to give him another chance. She leaves Walford with him and manages to get him down the aisle, leaving Michael to marshal his stalls and mull over what might have been.

April's last appearance is in October 1996. Eleven years later it is revealed that April is still living in Greece, and is unable to attend her nephew Bradley Branning's wedding to Stacey Slater. 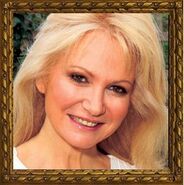 Add a photo to this gallery
Retrieved from "https://eastenders.fandom.com/wiki/April_Branning?oldid=207765"
Community content is available under CC-BY-SA unless otherwise noted.