Anthony Moon made his first appearance 25 July 2011. He is portrayed by Matt Lapinskas.

Anthony is a good looking, well groomed & reliable young lad. Like many of the Moon clan, he can turn on the charm with the ladies, but deep down, he is a romantic like his father and likes to fall in love.

He likes working with Eddie, and his little brother Tyler in the antiques emporium and is the ambitious one of the family. What he lacks in junk-shop knowledge, he certainly makes up for with a sound business brain! He hopes his five GCSE’s will take Moon & Sons to the next level!

While Tyler lives in the moment, Anthony has an eye to the future and always thinks about consequences. Even though he’s riddled with insecurities (and is a bit of a hypochondriac), he uses his sarcastic wit to cover it up. Anthony’s always sorting out Tyler’s problems, but in his mind, that’s just what big brother’s are for.

The Emporium was just the start of things, as far as Anthony's concerned. He has a sound business brain and hopes his school qualifications will take Moon and Sons to the next level! He dreams that some day his brother Michael will be coming to him for advice. Might be longer than he thinks, though...

Anthony likes to think of himself as the level-headed brother. He's always sorting out Tyler's problems, but in his mind, that's what big brothers are for.

But Anthony is the source of a fair share of their problems. When the Moon boys found themselves indebted to sinister Derek Branning, Anthony nearly got them both kneecapped by trying to woo Amira, rather than pay off their debt. In fact, there is a distinct danger that Anthony's romantic nature could well be his undoing some day.

The lucky lady who falls for Anthony will find herself treated like a princess. Unfortunately that wasn't good enough for Amira, who left Anthony heartbroken. It looked like happy ever after was calling when Anthony finally started dating Alice, but her brother Joey and dad Derek has other ideas... Derek organised a poker game and raised the stakes too high, causing Anthony to loose his family business. Anthony fled The Square, leaving brother Tyler behind to pick up the pieces.

Anthony first appears when he poses as a member of the Walford council to help Eddie eject a squatter from a premises that they want to move their antiques business into. He then decides to remain in Walford and helps his father set up the business. Anthony buys some candlesticks from Cora Cross, though she does not know their true value, but when Cora finds out their true value, she accuses Anthony of scamming her. Eddie sells the candlesticks for £8000, and when Tyler decides to take part in an unlicensed boxing match, Michael convinces Anthony that Tyler will win and that it would be a good idea to place a bet on him, knowing that Anthony suffers with a gambling addiction. Anthony steals £8000 from Eddie's safe, but bets on Tyler's opponent Artie Stiller, which leaves Michael unimpressed, as he has researched Artie and found out he is tough. During the fight, however, Tyler narrowly wins so Anthony has to confess to Eddie that he has lost the money. Shortly after he does, Tyler collapses and has a seizure, so is rushed to hospital. Eddie is sickened by Anthony's actions and tells him he wishes he was dying in a hospital bed, rather than Tyler. Distraught, Anthony storms out and attends a party run by Mandy Salter, culminating in him kissing her. Afterwards, Anthony returns to the hospital to learn that Tyler has been taken for a life-saving operation and is furious that Eddie was not around. Eddie then admits that his children would be better off without him. Tyler survives and recovers, but the brothers are told by Eddie that Michael set up an unfair fight to punish the family, leading Tyler and Anthony to reject Michael. Eddie then leaves Walford, leaving Tyler and Anthony the antiques business.

When Jodie Gold and Poppy Meadow become homeless, Anthony asks them to move in with him and Tyler. The girls move in, and it soon emerges that Poppy is attracted to Anthony. He prefers Jodie though, but nevertheless asks Poppy out on a date. After he and Jodie talk, Anthony suddenly kisses her, but she pulls away immediately. Jodie later reveals she is moving out and later confesses that she and Anthony kissed, which greatly upsets Poppy. Jodie and Poppy reconcile and decide to move away from Walford which upsets Anthony. Anthony takes a romantic interest to Amira Masood when she kisses him, however Anthony becomes frustrated when she pays more attention to her soon-to-be ex-husband Syed Masood, who she is trying to win back. Amira later invites Anthony for a meal at her family's home, but it is awkward.

When Derek Branning demands £4000 for some goods he asked Anthony and Tyler to sell, Anthony says he only has £3000 as he needed to pay some bills. He agrees to sell a necklace to get some of the money, but instead, he gives it to Amira. He then gambles the rest but loses it. Derek then asks Anthony and Tyler to either pay up or steal cable from the railway, otherwise he will break their legs. Anthony goes to Michael for financial help but Michael locks Anthony in his office and calls the police, who arrest Derek and Patrick Trueman, who offered to help the brothers. They are released without charge, but Derek then accuses Anthony and Tyler of calling the police, and increases their debt to £8000. They realise Michael called the police and confront him, and his partner Janine Butcher discovers what is going on. She pays off the debt, but Michael takes a beating from Derek.

Amira and Anthony's relationship continues and after having a small argument with Christian Clarke, Amira goes over to Anthony's house and the pair end up having sex for the first time. However, she later cries afterwards and appears to regret it. She tells him it felt wrong, but it is not his fault. She then decides to leave Walford without telling him. Anthony later learns that Amira has left after Syed tells him. When Alice Branning takes a liking to Anthony, her father Derek forces Anthony to take her out. Anthony is not interested in Alice, but is scared of Derek so cannot refuse. They have a couple of dates, but they go badly. Several weeks later, Alice receives flowers and assumes they are from Anthony. Anthony is then forced to take her out again, as he does not want to upset her. However, he tries to put her off by behaving and dressing badly. Later, during a game of spin the bottle, Anthony and Alice kiss, and he then decides that he really does like her and invites her on a proper date. Alice decides she is ready to lose her virginity to Anthony, although he does not pressure her. Her brother Joey Branningoverhears and manipulates Anthony into playing poker with Derek. Anthony cannot resist due to his gambling addiction and ends up losing the emporium. Both Derek and Joey tell him to leave and Alice is left stood up. Joey tells her Derek drove Anthony away, so she rushes to the emporium to find Anthony, but is too late as he leaves Walford via the tube station 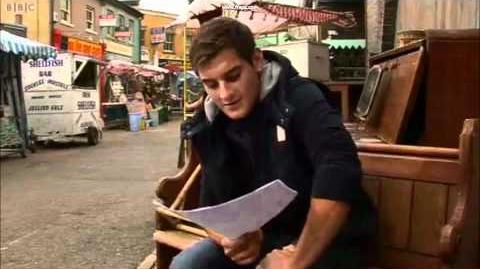 On Set with Anthony Moon
Add a photo to this gallery
Retrieved from "https://eastenders.fandom.com/wiki/Anthony_Moon?oldid=211644"
Community content is available under CC-BY-SA unless otherwise noted.