Annie returned to the show in February 2019, recasted to Marilyn O'Brien, as part of Dr Legg's funeral episode. Mary tells Dot that Annie is now in the police force.

Annie is the young daughter of punk Mary Smith. Her father was a member of a punk group of which Mary was a groupie, and had no contact with her.

Annie is three months old when she arrives, along with Mary, on 5 March 1985 and initially resides with her mother at 23b Albert Square. Mary is an incredibly irresponsible mother and Annie is always getting lumbered on neighbours when Mary gets tired of looking after her. Dot Cotton and Sue Osman are the usual victims, but almost everyone on the Square has a turn of looking after Annie. Sue Osman, in particular, grows extremely fond of Annie following the death of her son, Hassan. After bottling up her grief for months, she is forced to hold little Annie, which finally allows her to acknowledge her pent-up sadness.

Annie is once left alone in the launderette by accident while Mary goes drinking in The Queen Vic. Debbie Wilkins finds her and returns her to her mother, along with a few choice words for Mary. Mary also has a tendency to leave Annie home alone whilst she goes out to prostitute herself at night. On one such occasion, Annie throws her blanket at the electric fan heater, causing a fire. Luckily, Arthur Fowler manages to rescue her but as a result, Annie is removed from Mary's care and given to her grandparents, Chris Smith and Edie Smith, who live in Stockport. With the help of Mary's boyfriend Rod Norman and Carmel Jackson, Annie is eventually reunited with her mother, although it takes a lot of persuading to make Edie return her, who feels that Mary is not capable of caring for a young child. Annie spends Christmas Day 1987 in hospital after her intoxicated grandfather, Chris, abducts her and crashes his car into a wall in an attempt to take her back to Stockport. Luckily, Annie is unharmed. Eventually, Mary decides to leave Albert Square for good with Annie. They left in May 1988 and have only returned for one day in 2019, to attend Dr Legg's funeral. 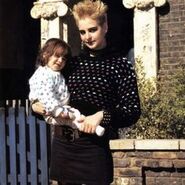 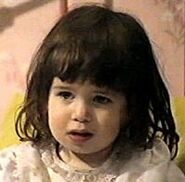 Annie Smith
Add a photo to this gallery

Annie has appeared in 116 episodes.

Retrieved from "https://eastenders.fandom.com/wiki/Annie_Smith?oldid=198271"
Community content is available under CC-BY-SA unless otherwise noted.