George Palmer
Annie Palmer made her first appearance 5 May 1997. Annie and her father ran illegal schemes and she later befriended Phil Mitchell who she treated like a slave. She is portrayed by Nadia Siwhala.

When Annie arrived in Albert Square in 1997, she is believed to be a former business associate of George Palmer. Together they open a print shop called "By The Letter" to cover their illegal deals, but Grant Mitchell catches them hugging. Grant's mother Peggy Mitchell is dating George, so Grant tells her what he has seen; when Peggy confronts George, he tells her that Annie is his daughter. Annie takes over George's nightclub, The Cobra Club, renames it The Market Cellar, and uses it to facilitate her money-laundering operations and illegal gambling). Like her father, Annie is well-connected in the business world; the Palmer name also carries serious clout in the underworld. Annie soon builds herself a small business empire in Albert Square. She gets most of the local council on side and she is instrumental in helping Ian Beale run for a council seat. She owns a significant share of the Walford Health Club with Grant, and starts a loan-shark business with his brother Phil Mitchell, not to mention her continuous dealing in money-laundering scams.

Annie is shrewd and smart and completely averse to showing any emotion, which comes from a desperate need to prove that she can cut it in a male-dominated business. She wants to show her father that she can do her job as good as, if not better than, any man. But Annie's tough exterior masks a hidden vulnerability, so she rarely allows men to get close to her. She has flings with Conor Flaherty (her loan-shark 'heavy') and Phil at the same time, and relishes watching them compete against each other for her affections. She later becomes close to her childhood friend Gianni di Marco, but when they look likely to embark on a serious relationship, Annie's father drops the bombshell that Gianni may be his son. It is revealed that George had had an affair with Gianni's mother Rosa behind Rosa's husband's back, and Gianni's paternity is unknown. The realisation that he could have been having an incestuous relationship with Annie devastates Gianni, and he cuts all ties with both George and Annie. Blood tests later confirm that George isn't Gianni's father, which devastates him as he has always longed for a son who would inherit the family business. Seeing her father's devastation, Annie shows some rare emotion and tells him she'd always sensed his desperation for a son and that is why she'd always strived so hard to prove her worth. Unable to deal with Annie's emotion, George leaves England in 1998, leaving Annie to run their businesses on her own.

Annie later becomes involved with fellow businessman Steve Owen; the two are locked in a cat-and-mouse game of one-upmanship with each other. He manages to get through her prickly defences, and even manages to buy her nightclub, which he renames The E20. Annie's loan-shark business hits a setback in 1999, when she dabbles on the turf of a rival business gang. Refusing to cede after receiving threats, she is beaten nearly to death by the gang's heavies. Although she shows a brave front, her confidence is severely undermined and she turns to Steve for support and comfort, but he rejects her, leaving her humiliated. To get back at him, she sells her health-club shares to Grant instead of him, but it is a hollow victory and in June 1999 she leaves Walford. She currently lives with her father in New Zealand, where his import/export business is based. 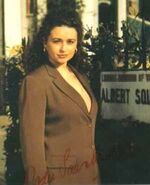 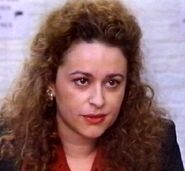 Annie Palmer
Add a photo to this gallery
Retrieved from "https://eastenders.fandom.com/wiki/Annie_Palmer?oldid=172025"
Community content is available under CC-BY-SA unless otherwise noted.