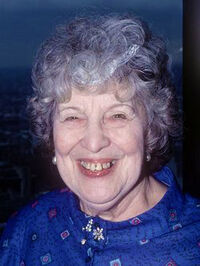 Anna Wing MBE (born 30th October 1914 in Hackney, died 7th July 2013) was a fully established actress who had a lifetime experience in television and appeared as the matriarch of the Beale family no other than the iconic Lou Beale in EastEnders from the shows interception in February 1985 to July 1988.

Anna Wing spent her early career in rep, including seasons at Glasgow, Nottingham, Sheffield and Croydon. Her many theatre appearances include the Edward Bond season at the Royal Court, Pinter's A Night Out and The Birthday Party at Hampstead Theatre Club, a season at Greenwich under Jonathan Miller, playing Mistress Quickly at Stratford, Ontario, and Hauptmann's The Weavers at the Round House.

Following up to EastEnders her theatre successes included playing Peggy Woodgreen in the award-winning play A Place on Earth at the Old Red Lion Theatre Club, Nurse Guinness in Heartbreak House at the Royal Lyceum, Edinburgh, and as the Mother in Catherine Hayes' play Skirmishes at Hampstead, in which Frances de la Tour and Gwen Watford played her daughters. Thames TV later screened the play.

Anna was seen in many BBC tv productions: The Woman in White, Sons and Lovers, Smiley's People, The Crucible, Sink or Swim, The Old Men At The Zoo, Sorry and Give Us a Break. She was also seen in the BBC drama series The Invisible Man and a comedy with George Cole Comrade Dad. She also recorded a play Flying Lady for the Yorkshire TV series Love and Marriage.

Anna's films include The Ploughman's Lunch, Runners and Xtro. She has appeared in A Doll's House with Jane Fonda, Full Circle with Mia Farrow, and in Resnais' Providence with Sir John Gielgud.

Anna worked regularly in drama on BBC radio and often appeared in commercials in vision or as a voice-over, besides completing many documentaries and training films.

Anna has two sons, Mark Wing-Davey, the well-known actor with whom she appeared on screen with for the first time in the Channel 4 film Darkest England, and Jon Wing-O'Connor, who is a teacher.

In 1985 came EastEnders, Wing's most famous role when she portrayed battleaxe Lou Beale, her character was at the centre of many storylines and was very popular with the fans. But in 1988, after nearly four years on the BBC soap, Wing decided to quit as she was not happy with the direction the show was going. 17.15 million people watched her final episode.

After leaving EastEnders, Wing focused more on theatre. She had some television roles in dramas Casualty, Doctors and The Bill and also some film credits in The Calcium Kid and Son of Rambow.

When she wasn't working herself, Anna enjoyed coaching other actors and holding impromptu musical gatherings around her piano at home. She lived in London but liked to escape the crowds whenever it was possible at her cottage in the beautiful Sussex Downs.

Retrieved from "https://eastenders.fandom.com/wiki/Anna_Wing?oldid=149345"
Community content is available under CC-BY-SA unless otherwise noted.