Pushed off a flyover by Johnny Allen

Mrs Hunter
Andy Hunter made his first appearance 3 July 2003. He is portrayed by Michael Higgs.

Andy is an employee of 'The Firm', of which he takes control after the murder of Jack Dalton by Dennis Rickman. He had previously been married and divorced to a woman named Bev. He is attracted to Kat Slater, and asks her out on a date in The Queen Victoria pub, but she harshly turns him down. However he keeps trying and she eventually accepts his advances; and after some weeks he falls in love with Kat.

He proposes to her while they were in New York and she accepts. On their wedding day, Alfie Moon runs in to the church and says he loves her and Kat leaves Andy for Alfie thus making Andy and Alfie enemies. However Andy gets his revenge as Alfie owes him a large amount of money. Andy blackmails Kat to have sex with him behind Alfie's back, in order to pay off the money and if she refuses, he says he will have Alfie killed. Alfie manages to provide the money, but only after Kat has already slept with Andy. When they are in bed together, Andy secretly films everything with a hidden video camera he sets up, and gives the tape to Alfie.

Alfie later watches the tape out of curiosity and is heartbroken at what he sees, and confronts Kat about it, nearly ending their relationship. Andy hopes for them to split but he doesn't succeed as Alfie and Kat are still going strong, and Alfie also gets his revenge by giving Andy a tape thinking that it is the same tape that Andy sent him. However, as Andy starts to watch it, he is taken aback as he discovers it is a different tape of Alfie and Kat's wedding. After that, Andy leaves them to their relationship but still bullies Alfie. Andy starts having a relationship with Sam Mitchell, and he later marries her. However, when Den Watts and Marcus Christie trick Sam into selling the pub to Den, and signing her house over to Andy, Andy leaves her, taking Sam for every penny she has and leaving her homeless.

In 2004, Paul Trueman reports Andy to the police for his criminal activities. Andy takes his revenge on Paul by hiring a hitman from The Firm to kill him. Paul is killed in December 2004. Paul's father, Patrick Trueman begins searching for him and identifies his body when it is recovered. Patrick soon discovers that Andy is involved with Paul's death. Andy tells his employee Pat Evans that he had hired a hitman to kill Paul and threatens to kill her if she says anything. Patrick tells the police that Andy is involved but there is no evidence against him. Patrick later swears revenge against him.

In 2005, Andy hires Alfie's cousins Danny and Jake - dubbed the "Moon Brothers" - to work for him at the behest of their crime boss: Johnny Allen, whom Andy quickly forms a partnership with. However, the two mobsters quickly become rivals when Andy hatches a plot to con Johnny out of £750,000. He nearly succeeds until Johnny deduces Andy's plan. In response to this, he authorizes a meet-up with Andy near a motorway bridge and the two seemingly part ways when Johnny announces his "retirement". As they shake hands, however, Johnny - after giving Andy a "final tip" before telling him "enjoy your flight" - suddenly forces Andy off a motorway footbridge, sending him plummeting to his death. The police are later informed of Andy's death, but they mistakenly believe that it was a suicide. Ironically, Andy died on the same night as Den - who himself was bludgeoned to death by his wife, Chrissie, during the events of Andy's murder. Sam is asked to attend Andy's will reading and she goes, expecting to get all of his money and assets. However, Andy leaves the house to Pat Evans and the bookmakers to Dennis, leaving Sam with just his wedding ring, "so she can sell it, get her roots done and still be the dumbest blonde I ever knew."

Towards the end of the year, Dennis quickly suspects Johnny of murdering Andy when the pair have a feud - though Johnny has Dennis killed by Danny in retaliation for the latter attacking him. Three months later at the end of March 2006, Johnny - at the behest of his daughter Ruby - confesses to the police of all his crimes, including the murders of Andy and Dennis. A couple of months later, Johnny gets his comeuppance for Andy's murder when he dies of a heart attack whilst serving life imprisonment for his life of criminal reign. 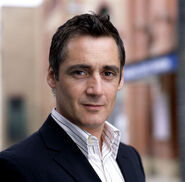 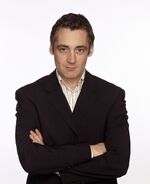 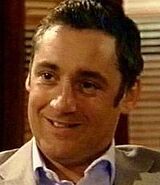 Andy's wedding to Sam Mitchell
Add a photo to this gallery
Retrieved from "https://eastenders.fandom.com/wiki/Andy_Hunter?oldid=198339"
Community content is available under CC-BY-SA unless otherwise noted.