Amy's mother Roxy Mitchell starts dating Sean Slater, but Roxy's sister Ronnie Mitchell tries to break them up when she discovers Sean is a drug dealer as Roxy was once addicted to cocaine. After arguing with Ronnie, Roxy gets extraordinarily drunk and has sex with Jack Branning, who is Ronnie's partner. This causes Amy to be conceived; however, Roxy still believes that she is Sean's child, not Jack's, even though there is a high chance she could be Jack's. Roxy later discovers she is pregnant and tells Sean that he is the father, while she and Ronnie plan to return to Ibiza. They leave, but Ronnie soon returns looking for Roxy, revealing that after they argued in Ibiza, she disappeared. It transpires Roxy is staying with their father Archie Mitchell in Weymouth, to Ronnie's horror. Roxy is adamant she will live with Archie, but Sean persuades her to return to Walford, telling her he loves her. They move in together upon their return and later marry. On 13 November 2008, when Roxy goes into premature labour, Archie pretends to call Sean but doesn't so he misses the birth. Amy is named after her deceased cousin, now known as Danielle Jones, the abandoned daughter of Ronnie. Roxy initially decided to raise Amy with her friend Christian Clarke, after Sean missed Amy's birth but changed her mind when she and Sean reconciled. Soon after Amy's birth, Jack asked Roxy for a paternity test. Aware Amy maybe his daughter

On Christmas Day 2008, Sean finds out he isn't Amy's father. Angered by this, also not knowing that in fact, Jack is Amy's father, he kidnaps her, but Sean's younger sister Stacey brings Amy back home safely, explaining that they had just taken her out. Sean then pretends to forgive Roxy and asks her and Amy to move away with him. Sean, Roxy and Amy drive into a frozen lake, with Sean revealing he intends to kill them all and if he can't have Amy, nobody can. The car then stops, and Roxy gets Amy to safety, but when she steps back, she and Sean fall through the ice. Jack and Ronnie later track them down, and when Ronnie spots Roxy in the lake, she jumps in to save her sister and Sean walks off slowly into the darkness. Roxy then changes Amy's name from Slater to Mitchell, making her Amy Mitchell. When it is revealed that Amy is Jack's daughter, he and Ronnie argue, and the pair split up. Roxy then begins dating local GP Al Jenkins; however, their relationship ends when someone complains that he is seeing his patient.

In November 2011, Jay and Ben Mitchell were asked by Roxy to look after Amy while she went out with Kim Fox and Christian Clarke. But after Amy is put to bed, Ben discovers the key's to Jack's flat next door, so he and Jay go inside to have a look. While Ben and Jay are in Jack's flat, Amy wonders into the bathroom and starts running the bath full to the top. She then goes to, but her doll into the tub and her head slip under the water, making her feet unable to touch the ground and she drowns. Jay and Ben rush back into Roxy's flat after Jack arrives home from work. They realize Amy isn't in her bed and discover that she has drowned in the bath. Jay calls an ambulance while Ben runs for help. Luckily, he spots Denise Fox, who rushes across the street to doctor Yusef Khan's house. Jay stays on the phone to the paramedic and explains that Amy isn't breathing. Yusef arrives at the flat and starts giving Amy mouth to mouth. This is a success and Amy begins breathing and crying. Denise then knocks on Jack's door and tells him that he needs to see Amy. Jack rushes into Roxy's flat and over to Amy as she cries.

Jack accuses Roxy of neglect then attempts to gain custody of Amy; he is awarded this temporarily after a DNA test is carried out between Jack and Amy as Sean is still the legal father on Amy's birth certificate. Jack then stops Roxy having any contact with Amy and tells her that she will never get Amy back. Jack then tells Roxy he is taking her to court for full custody of Amy, leaving Roxy distraught as she believes he will win. When Amy falls over in the park and hurts her head, Roxy is furious at Jack for getting distracted. Roxy hires a solicitor, Jimmie Broome, who suggests she discredit Jack. The hate harms Amy, so Roxy and Jack agree not to argue in front of her. They momentarily soften towards each other, which leads to them having sex. Still, after Roxy discovers Jack has forged her signature to get Amy a passport, she believes he intends to flee the country with their daughter. She threatens to report this, and Jack withdraws his bid for custody and at the court hearing, and it is later revealed that Roxy has won back custody of Amy and Jack will have to hand her over - leaving him heartbroken.

On New Year's Day, Amy went away to Ibiza with her Ronnie and Roxy. Amy returned weeks later with Roxy and lived with her until Dean Wicks raped Roxy. Roxy felt like she needed a break, so handed her over to Jack. Jack and Amy went to live in France for a while but soon came back to live with Ronnie and her son Matthew, once they got back together and were later joined by Jack's son Ricky after his mother left him in Jack's care and returned to her life in Portugal. Ronnie nearly adopts Amy after she and Jack got engaged, but the arrangements were never finalized, and Amy goes back to living with her Mum.

On Jack and Ronnie's wedding day, Ronnie and Roxy mess around in the hotel swimming pool. Roxy jumps in, and her dress gets caught, therefore Ronnie goes in to save her, but her dress also gets stuck, and the pair drown. Their bodies were never discovered until the next day. Jack then breaks the news to Amy and Ricky, who are left heartbroken. Amy's behaviour then wholly changes and becomes unsettling, such as refusing to speak. This begins to get worse when Matthew goes to live in Ireland with his biological father, Charlie Cotton. She starts becoming disruptive at school and does not want Jack to be her dad anymore. Amy cheers up a bit and makes Jack a Father's Day card. On the day of their funeral, a song is played in the church, which was Ronnie and Roxy's favourite - leaving Amy happy as she hugs her dad. Everyone lights up their glow sticks and dance to the song. Jack then hires a nanny, Ingrid, to look after the children. Amy and Ricky spray her with a water gun, and later Ricky accidentally gets gum in Amy's hair, but the nanny gets it out with peanut butter.

When Jack starts dating Mel Owen in 2018, he goes on a date with her to Mel's ex-husband, Ian Beale's restaurant. However, Ian only invited Mel as he hopes to tell her that he still has feelings, but instead, Ian is left to look after a hyper Amy while Jack and Mel go on their date. Amy is then left with Mel while Jack goes to pick up Ricky from his football class as he has twisted his ankle. Mel and Amy do each other's makeup, and Amy tells Mel that her dad doesn't like her wearing makeup. Mel replies, telling Amy that her dad doesn't know girls, and Amy laughs. Amy then tells Mel that her mother used to do her makeup before she died. Mel then starts to get uncomfortable when Amy asks her if she loves her dad as her Ronnie did, Mel is left speechless when Amy then asks her if she is going to be her new mum. Mel then stops playing with Amy and tells her that her dad is right; she's too young for makeup. When Jack returns with Ricky to pick up Amy, he can tell that something is not right with Mel and asks her if Amy has been misbehaving, but Mel tells Jack to take the children home as Ricky needs to rest his foot.

In September 2018, Amy caught Jack kissing her uncle Max's wife Rainie and records them on her tablet. Later that day, a social worker arrives at the house to speak to the family about Max and Rainie getting custody of Max's granddaughter Abi. The social worker asks to talk to Amy and Ricky alone and asks the children how they would feel about Abi coming to live with them and what they know about babies. The children tell him what they know, and Amy points out the fact that you need to love babies just like girls love her fathers and love to kiss him. She then carries on saying that her Rainie loves to kiss as well. However, the social worker assumes that Amy means that Max and Rainie kiss all the time and tells her that this is a very loving house. Once the social worker goes home, Jack tells Amy she did an excellent job, and he is proud of her. Later that night, Amy gets out her tablet and watches the video of Jack and Rainie kissing with an evil grin on her face - just like her mum would've done.

In late April 2019, Jack asks Stacey to pick Amy and Ricky up from school. However, everyone is left confused as Amy has gone missing. It turns out Sean had returned to Walford to see Roxy and Amy. Sean tells Amy that Roxy had sent him. When Amy asks Sean who he is, he tells her that he is a friend of her mother's. Amy asks Sean questions about Roxy, and Sean tells Amy that she looks exactly like her, unknown to Sean that Roxy had died two years previously. When Amy demands to go home, Sean tells her that he lost a little girl who would have been Amy's age, unknown to Amy, that the little girl Sean lost was her. He then goes on to tell her that she can't let anyone tell her what to do in life. After a while, Sean returns Amy home as she runs to Jack. Jack tells Amy to go and see Max at the car lot while he talks to Sean. Jack then punches Sean and tells him to stay away from his daughter. Sean demands Jack to take him to Roxy. Jack then realizes that Sean doesn't know she is dead and takes him to her grave. The pair fight, as Jack explains about Ronnie and Roxy's death. Sean tells Jack he would never hurt Amy as he once raised her as his daughter. 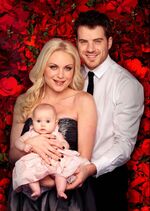 Amy with Roxy and her supposed father Sean 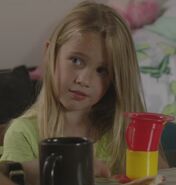 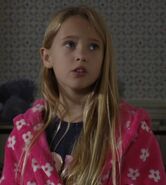 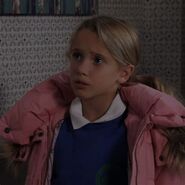 amy!
Add a photo to this gallery

Retrieved from "https://eastenders.fandom.com/wiki/Amy_Mitchell?oldid=227666"
Community content is available under CC-BY-SA unless otherwise noted.