Emine Osman
Ali Osman made his first appearance 19 February 1985. He is portrayed by Nejdet Salih.

Ali Osman was born on the 10th April 1956 in Cyprus to Hassan Osman and his wife. A Turkish Cypriot, Ali, his older brother Mehmet Osman, and their family moved to London in 1975 when Ali was 19. Ali became the owner of the Bridge Street Café in Walford, which he leased and ran together with his English wife Sue, who married in 1982. Their son Hassan was born in 1984.

Ali is a gambler and frequently holds games of poker in the café after closing time and wages bets at the bookies - a huge source of concern for Sue. Ali rashly decides to wager his business on a bet in 1985 and wins a substantial amount of money. The Osmans are overjoyed, however, the next day disaster strikes when baby Hassan dies of cot death. Ali and Sue spend months coming to terms with their son's death. The marriage is tested further when they try for another baby. When Sue does not conceive, Ali fears he is impotent and questions his masculinity, resulting in him attempting to seduce other women; the desperation for a baby causes constant problems until Sue finally falls pregnant again in 1987. Their second son, named Ali (Omer Mustafa Salih), is born in March 1988.

When Sue begins to tire of life in Walford, Ali tries to get funds together to facilitate their move. In doing so, he runs up huge gambling debts to Joanne Francis, manageress of Strokes wine bar, also a member of the criminal underworld known as The Firm. Desperate for money to hide his losses from Sue, Ali turns to employee, Ian Beale, for a loan. Ian charges him 10 percent interest. Ali continues to gamble, struggling to repay Ian, until he manages to win. Pleased with himself, Ali's boasting catches the attention of Donna Ludlow ; she seduces Ali and after they have sex, Donna blackmails Ali, threatening to tell Sue unless he pays her. Ali pays, but the truth comes out regardless when Donna tells Sue in retaliation to an insult. A devastated Sue turns to Mehmet for comfort and, in a bid for revenge, she kisses him in front of Ali. Thinking that his brother has been sleeping with his wife, Ali attacks Mehmet and banishes him from his life and after much rowing, Sue flees with Little Ali without telling Ali where she is going. Ali searches for Sue and eventually finds her visiting Hassan's grave and snatches Little Ali back. Losing another son makes Sue become unstable and she is sectioned.

Now a single father, Ali struggles to keep his businesses afloat. He cannot afford the rent increase and attempts an insurance scam by torching his cafe, which is witnessed by Ian. Ian uses the situation to his advantage, forcing Ali to sign the cafe over to him and a feud is sparked between them when Ali neglects to mention that the kitchen utilities were bought on hire purchase and are later repossessed. Ali continues to struggle with juggling work and parental responsibilities. He is forced to resign from Frank Butcher's (Mike Reid) car lot when he discovers his child-minder is neglecting his son. He takes up mini-cabbying, but when his car is stolen, he can't work so he is forced to send Little Ali to live with his parents. With no money, Ali attends a game of poker but loses to his landlord Alan McIntyre, whom Ali had feuded with since 1987. As a result, Ali is evicted from his flat when he is unable to pay Alan. In a fury, Ali smashes up the flat with a crowbar, breaking all the windows and doors, until his family arrive and send him and Little Ali to Northern Cyprus in October 1989. Ali has never been back to Walford since. 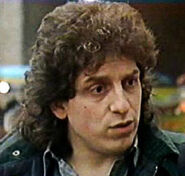 Ali Osman - Name Card
Add a photo to this gallery
Retrieved from "https://eastenders.fandom.com/wiki/Ali_Osman?oldid=188192"
Community content is available under CC-BY-SA unless otherwise noted.