Former; guest
Alexa Smith made her first appearance 1 October 2012. She is portrayed by Saffron Coomber.

Alexa grew up in care and was friends with Lola Pearce. She was eventually fostered, leaving Lola in care.

Alexa has had 3 abortions.

Alexa is a former friend of Lola Pearce and is the reason she lost her daughter Lexi Pearce, however with the help he of Lexi's grandfather Phil Mitchell and his partner Sharon, Lola was granted custody of Lexi and made sure that Alexa knew not to come near her or Lexi again.

Alexa first appears when Lola sees her with a group of friends and recognises her from their time together in a care home. The next day, Lola meets Alexa and her friends, and Lola tries to impress them, keeping a look out while they shoplift. Later, they go to the local café where Alexa starts throwing things at people, including Lola's friend Abi Branning. Lola defends Abi, and Alexa says that she can only be friends with one of them, so Lola sides with Abi. Alexa is later shocked to discover Lola has a baby, and that Lola named her Lexi, after her.

The next day, Lola sees Alexa and her gang, and Alexa insults Lexi, saying she should have had an abortion, so Lola goes to hit Alexa but is stopped when Lexi starts crying. When Abi arrives, Alexa mocks her for wearing makeup, wiping it from her face, and she and her friends start pushing Abi around, filming everything on a mobile phone. They take Abi's phone, so Lola snatches it from Alexa. Alexa's friends grab Lola and when Alexa says that Lexi is dead and that she's gunna give Lexi her first kicking, Lola breaks free and punches Alexa in the face, leaving her with a nosebleed and being badly bruised. Alexa and her friends then show the police the part of their mobile phone video showing Lola attacking Alexa, and Lola is arrested, with Lexi being taken away by social services.   About six weeks later, Alexa and her gang return and attempt to bully Alice Branning until her friend Ray Dixon chases the gang away. The next day, Alexa and her friends see Lola and her friend Jay Mitchell and taunt them about Lexi being in care. Lola tries to attack Alexa, but she is stopped by Jay and her grandfather Billy Mitchell. Later, Billy sees Alexa alone and tells her he knows what it is like to be in care, as she does, and asks Alexa to give Lexi a chance to come home. Alexa is affected by Billy's words but when Lola arrives, she accuses Billy of witness tampering. However, Lexi's grandfather Phil Mitchell learns from his lawyer that Alexa has dropped the assault charges against Lola.

Three months later, Phil has custody of Lexi, but Lola snatches her after hearing Phil say she will never get Lexi back. Lola calls Alexa, having nobody else to turn to. Phil, Billy and Sharon Rickman find Lola's phone and call Alexa, offering her money for information. They meet Alexa, who says Lola is in Tottenham, as she could not help Lola. Phil searches the squat that Alexa is staying in, but does not find Lola, though she is hiding in the house. She and Alexa talk, and Alexa says she ran away from her foster home. Alexa says Lola can stay the night while she parties with her friends, but Lola leaves when the police arrive. 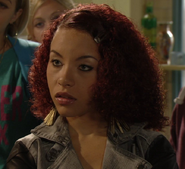 Alexa in 2013
Add a photo to this gallery

Retrieved from "https://eastenders.fandom.com/wiki/Alexa_Smith?oldid=178035"
Community content is available under CC-BY-SA unless otherwise noted.