When at school, Alex found himself involved in petty crime to supplement the family income. He was extremely lucky not to have been caught and get a criminal record.

Alex arrived in Walford as the local vicar. He ran a homeless shelter (Bridge House) with the help of Christian follower Sarah Hills, despite protests from many of the residents in Walford. Alex fell in love with Kathy Mitchell while her marriage to Phil had begun to crumble. Alex and Kathy later broke up when she left for South Africa, ignoring Alex's pleas to stay. A while later, Alex left the Square to work in a mission in Somalia.

His first major television role, Driscoll was sent to audition for EastEnders by his agent, and following a screen, the test was given the part of vicar Alex. His first scene was with actress Daniella Denby-Ashe who played Sarah Hills. He has reflected, "I was chuffed. But that soon turned to fear when I had my first scene with Daniella. It was so nerve-racking. I didn't understand the set-up. I don't know how I got the words out."

Alex's most notable storyline was a love affair with Kathy Mitchell (Gillian Taylforth) who was married in the serial to Phil Mitchell (Steve McFadden). Discussing the storyline, Driscoll suggested that Alex had been "wracked by emotional and spiritual turmoil ever since" sleeping with Kathy. He added, "Alex has got a lot of conflicts. He's been suggesting to his father that he should work at his relationship with his wife - but there he is having an affair with a married woman. He feels a bit of a hypocrite - he feels guilty and ashamed. But the inescapable fact is he's attracted to Kathy. Something strange and wonderful happens to him when he's around her."

Driscoll quit the role in 1999, claiming that it had always been his intention to stay for only a few years: "I felt it was the right time to go. I'd learnt a hell of a lot. The pace and the turnover are incredible. It has been brilliant but I'm an actor, and I want to do different things [...] When I finished, the whole cast gathered to clap me off the set. I felt it was an ending and it was sad. It was emotional because it was my first major role and there were things to prove. But it's time to move on."

A popular character with female viewers, Driscoll claims that he received "loads of fan-mail from women and would get stopped in the street by people who told him: 'If you were my vicar, I would go to church."

The character came under criticism in 1998 following his affair with Kathy Mitchell. One vicar complained that the BBC was portraying Christian characters as "jokes or frauds". Gillian Taylforth, who played Kathy, reportedly had reservations about the plot too as she feared Kathy sleeping with a vicar would cause a negative response from viewers. 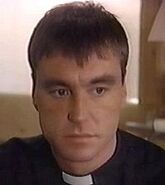 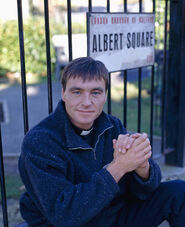 Alex Healy
Add a photo to this gallery
Retrieved from "https://eastenders.fandom.com/wiki/Alex_Healy?oldid=192196"
Community content is available under CC-BY-SA unless otherwise noted.