Albie Watts (also Kayden Watts) is the son of Sharon Watts and Keanu Taylor and is the half-brother of Dennis and Peggy.

Albie was born 14 February 2020 and was the result of an affair between Keanu Taylor and Sharon Mitchell. Albie was born the day Sharon’s other son Dennis sadly died due to drowning and as a result of this Sharon thought she couldn’t cope and gave the baby to Keanu’s mother Karen Taylor, who named the baby “Kayden”. However Sharon then realised she needed her son and got him back, re-naming him “Albie”

Sharon and her husband, Phil Mitchell's relationship, starts to deteriorate due to Phil's bullying behaviour and her boredom with simply being Phil's stay at home wife and finds herself becoming attracted to Keanu. However, Sharon does not know that he is only 19 years old. After Phil leaves to visit his brother, Grant, in Spain, Sharon invites Keanu over to the house where they kiss and have sex.

Keanu then wants to become a taxi driver but is too young, Sharon discovers he's only 19, younger than she believed him to be. The age gap unsettles Sharon, and she ends their affair. However, they later reconcile. Sharon starts receiving threatening text messages from an unknown person regarding their affair. At a party, Sharon and Keanu are seen kissing by Keanu's mother Karen Taylor who demands they stop the cheating. Sharon is then shocked to find out it has been Phil's daughter Louise Mitchell sending her text messages, she manages to persuade Louise she has the misunderstood everything and successfully convinces her to drop the accusation before ending the affair with Keanu once more. Keanu asks to remain friends with Sharon, and she initially agrees, but when a goodbye kiss between them turns into sex, she admits that things will be too weird between them and tells him they should stay away from each other. However, they reunite their affair again weeks later. Sharon then tells Keanu to move on for good, and he has sex with Louise. Sharon returns two months later to witness Keanu and Louise kissing, now in a relationship, which she is jealous of. Keanu confronts her in the Vic toilets, saying he still has feelings for her, but Sharon denies she feels the same. They then reconcile and continue to have an affair behind Phil and Louise's back. This leads to Louise and Sharon becoming pregnant and after working out the dates, Sharon realizes Keanu is the father. Kayden's sister Peggy is then born in December and Albie is born in February.

He was born after Ben Mitchell, took Sharon to the funeral parlour and threatened her at gun-point. He did this to find out where Keanu was keeping his boyfriend, Callum Highway after Keanu kidnapped him in a revenge plot against the Mitchells. During a phone call to Keanu, forced by Ben, he tells her that he is going to the boat party (arranged for the Queen Vic after Linda Carter and Mick Carter win Pub of the Year) looking for Dennis Rickman. Sharon then goes into labour. Ben panics and calls his mother, Kathy Beale, for help. When Kathy arrives, she convinces Ben to leave and go and find his dad, Phil Mitchell, who had followed Keanu onto the boat. Kathy calls an ambulance and helps Sharon through her labour. After getting Sharon onto the floor, Kathy sees she is bleeding and worries for both Sharon and the health of her unborn child. By the time the ambulance arrives, Sharon had given birth to her newborn son. Simultaneously, Dennis had been locked in a locker room on the boat by Ian Beale as revenge for a bullying campaign against his son, Bobby Beale, which resulted in him being attacked and almost dying. When Keanu and Phil fought the boat, they fell into the steering wheel causing the ship to crash and the lower decks to start filling with water - including where Dennis is being held. After losing the keys for the door and, then, smashing the door down with a fire extinguisher, Ian successfully pulls Dennis out of the locker room, and they attempt to swim through the corridor to safety. Unfortunately, the corridor filled with water, washing both Ian and Dennis into the River Thames and being pulled to shore by rescue teams. After rounds of CPR, Ian is saved and taken to hospital, but Dennis is pronounced dead at the scene. Keanu sees this and arrives at the hospital to inform Sharon of her son's death and to see his baby or the first time. Sharon then bans Keanu from seeing her ever again, which results in him leaving Walford.

When Sharon returns home, to the Beale household, she is distant from her baby as she grieves for Dennis. She later offers Karen Taylor to look after the baby for her; she agrees. Karen then gives her condolences to Sharon and tells her that Phil caused the boat crash by attacking Keanu. When Sharon goes to collect her newborn, Karen comments that he looks like a "Kayden" which she had initially considered naming her son Keegan, and asks Sharon what she thinks of it. Sharon doesn't pay attention. Later, Sharon steals Kathy's keys to the Mitchell household so she can go through pictures on Dennis. She considers taking her own life but backs out at the last minute. When Ian and Kathy realise the keys are missing, Ian goes to get Sharon and tells her she has a son to live for and it will get better. However, Sharon tells Ian she doesn't want him - she wants Dennis. The next day, Ian backs off from Sharon as the baby is none of his business.

When Sharon returns from Australia, she and Phil rekindle their romance and plan to move into the Vic. Karen is having a going away party for her and Kayden and Sharon goes round to see Kayden and watch him for a little bit. She stays with him for hours and even lays on the bed with him. Karen tells Sharon it isn't too late to take him back, but Sharon tells her that she is his mum now not her and walks away. On the day of Karen leaving to Croydon with Kayden, Sharon considers going to say goodbye to her son but decides not to with Phil's encouragement. However, Sharon takes a teddy that Dennis bought for Kayden before he died to Karen's house and ended up seeing him and cradling him. When Sharon returns home, she tells Phil that she told Karen not to go and that she wants Kayden here with them. Phil is not happy about this but allows it to happen. When Sharon gets Kayden back, she hides some nappies and tells Phil she needs to get some more to make Phil and Kayden spend time with each other. Phil tries to make an effort, but when Sharon returns, he tells her she needs to choose between him and Kayden, and she chooses Kayden. Phil tells her to get out of his house. The next day, Sharon decides not to give up, and she asks Phil to give it a chance, but Phil tells her that 'that thing' is the reason Denny is dead and that she is also to blame and tells her she will not get the Vic whilst he is still breathing.

Kayden Watts in the Alternate Ending in the 35th Anniversary 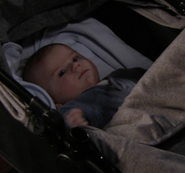 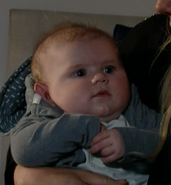 Add a photo to this gallery
Retrieved from "https://eastenders.fandom.com/wiki/Albie_Watts?oldid=212240"
Community content is available under CC-BY-SA unless otherwise noted.