EastEnders Wiki
Register
Don't have an account?
Sign In
Advertisement
in: Walford, Streets in Walford, Places in Walford

Albert Square holds the postcode E20 and is a Victorian-square in Walford, attached to Bridge Street, Victoria Road and Turpin Way.

It was built before the 20th Century, and consisted of fourty six victorian terraced houses, a public house, gardens and a market sloping down the south side of the Square leading on to Bridge Street and Turpin Road. The Square has only had minor changes over the years, the public house has seen various coatings, the shop has had several names and the café has had several faces. It was announced not that long ago that Albert Square and Walford are due a complete make-over and is currently under reconstruction, and the delayed time for the finished product is due to be aired onscreen in 2020.

The only business currently up and running in the Square is The Queen Victoria public house which is owned by Ian Beale and run by Sharon Beale (Watts-Mitchell).

The Building of Albert Square

Albert Square was once no more than a sloping patch of mud and sand on the back-lot of the BBC's studios at Elstree in Hertfordshire. Its remarkable transformation into Britain's most famous set of late-Victorian dwellings began in February 1984.

Overseeing the building of the square was senior designer Keith Harris, who had spent the past 19 years working on various BBC productions. "Even so," he said, "the unique opportunity to design a full-size Victorian square was a tremendous challenge." Indeed, Albert Square was to be one of the largest exterior sets ever built for British TV production. "It was rather like leaving TV to work on a feature film," said Keith, "except that our square had to be designed to last through a much longer lifespan than does the average film set."

From the outset, Keith worked closely with producer Julia Smith and script editor Tony Holland. As the storylines developed, so too did the ideas for the homes and habitats of the characters. One of the first things to be decided upon was the exact siting of the street and houses in the square. "A great many factors had to be considered," said Keith. "The direction of the sun, for instance, and the neighbouring tower block which now forms part of the permanent backdrop to Albert Square."

Also taken into consideration was the amount of possible 'nuisance' that the set might cause to the surrounding neighbourhood. "After all, no one wants a view of a 35-foot brick wall from their living room!" And so, taking all these points into account, Keith Harris made the first steps in the birth of Albert Square, by drawing up his early plans - with a stick in the sand!

Albert Square (often referred to as "The 'Square") is the fictional location of the popular BBC soap opera EastEnders. It is ostensibly located in the equally fictional London borough of Walford in London's East End. The square's design was based on the real life Fassett Square in the East End, and was given the name Albert Square after the real life history of Prince Albert and the then deprived East End. The public house, The Queen Victoria, was also given its name due to this.

Central to the Square are the gardens and notably during the Christmas season the gardens are often adorned with decorations. These gardens are the home to Arthur Fowler's bench, which was placed there in memory of him.

In 2011 it was revealed that Albert Square's postcode is E20 6PQ, despite previously having used E20 6RF on Dot Branning's Driving Licence.

In June 2001, 17-year-old Ashley Cotton was killed instantly when he crashed a stolen motorbike in the Square.

In December 1999, Tiffany Mitchell was knocked down and killed by Frank Butcher's car.

In December 2005/January 2006, Dennis Rickman was stabbed to death by Danny Moon.

On Christmas Day 2006, Pauline Fowler died in Albert Square, next to Arthur's bench, under the Christmas tree after suffering a fatal brain haemorrhage.

On April 2, 2009, Danielle Jones was killed by Janine Butcher, after Ronnie found out Danielle was her daughter.

In February 2010, Bradley Branning fell to his death off the Queen Victoria roof.

In December 2017, Lauren and Abi Branning fell from the Queen Victoria roof after saving their father Max from committing suicide. Three weeks later, Abi dies after her life support is withdrawn as there are no chances of recovering and reviving her.

On 21st May 2018, Shakil Kuzemi was stabbed in the alleyway next to the Queen Victoria. He tried to get help but collapsed in the square. He was found on 25th May unconscious in the bushes, bleeding from his wound. He was taken to hospital but did not survive.

In February 2020, Daniel Cook passed away from cancer while sitting on Arthur's Bench.

Albert Square within the EastEnders set

In reality, the exterior set for the fictional Albert Square is located in the permanent backlot of the BBC's Elstree Studios in Borehamwood, Hertfordshire at 51°39′32″N 0°16′40″W﻿ / ﻿51.65889, -0.27778. The set is outdoors and open to the weather, and much of it consists of full-scale practical buildings and street furniture. As the show is filmed up to six weeks in advance, the trees need to have extra leaves stuck on them during the Spring to make them look like they would in Summer.

It is mooted that Albert Square, will transfer to Pinewood Studios in Buckinghamshire where a new set will be built as the current set is looking rather shabby, with its flaws showing up on High-definition television broadcasts.

Albert Square, Walford Many years ago.

Albert Square Early in the Morning, Seen from the Railway Bridge. 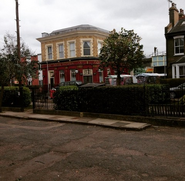 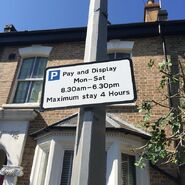 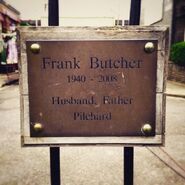