Natasha Butcher
Liam Butcher
Tiffany Butcher
Morgan Butcher
Whitney Dean (adoptive)
Louie Beale
Albert William Beale was the husband of Lou Beale, and together they had seven children, and eleven grandchildren. He was born on 16 July 1909 and died on 11 September 1965.

Albert Beale came home one night with a black eye and his friend had a missing tooth and they didn't speak for a year.

He appeared in the 1988 EastEnders spin-off CivvyStreet, played by Gary Olsen. He also appeared in the EastEnders novels by Hugh Miller. Albert and his wife Lou moved into 45 Albert Square shortly after their wedding. They had seven children. Their first child, Maggie, was conceived out of wedlock and adopted by an Irish family shortly after she was born. Albert and Lou had four sons (Kenny, Harry, Ronnie and Pete) and two more daughters (Dora Beale and Pauline Fowler). Dora, Ronnie and Harry never appeared in the TV series. Albert fought in World War II, and was awarded the War Medal 1939–1945 — which is now in Ian Beale's possession. When Albert died in 1965, Ronnie inherited the stall but discovered he had a fatal heart defect and passed the stall onto Pete. Albert's three grandsons that appeared in the show, Mark Fowler, Ian Beale and Martin Fowler, all have Albert as a middle name. 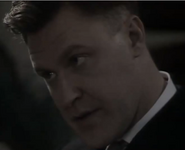 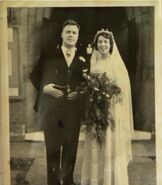 Albert Beale and Lou Beale Wedding Photo
(Secrets from the Square)
Add a photo to this gallery
Retrieved from "https://eastenders.fandom.com/wiki/Albert_Beale?oldid=210779"
Community content is available under CC-BY-SA unless otherwise noted.