Blossom Jackson
Alan Jackson made his first appearance 16 November 1993. He was the husband of Carol Jackson and stepfather to Bianca Butcher, Robbie Jackson and Sonia Fowler and blood father to Billie Jackson. Alan was played by Howard Anthony.

Alan Jackson was born on the 22 November 1967, Alan was 20, single and a plumber when he met Carol Branning. He came to her council flat to unblock her sink and they started dating each other soon after. Carol had gone through a lifetime of struggle and heart-ache. In the past, the fathers of her three children, Bianca Butcher, Robbie and Sonia, had all deserted her, but Alan was different and he stuck around, giving the family real stability. Soon he had added to her collection of children, fathering Billie in 1988. Even though Alan and Carol were not married initially, the whole family took Alan's surname. They were later joined by Alan's grandmother Blossom Jackson.

When Alan arrives in Walford with his family in November 1993, he is unemployed and although he does odd jobs for his neighbours, his inability to bring in a regular wage causes conflict between him and Carol. Alan is quite kindhearted and jovial but can be handy with his fists at times, such as threatening Robbie's mate Kevin for supplying him with booze and getting underage Sonia drunk. Alan gets a job working on Mark Fowler's fruit and veg stall but neglects to inform the Job Centre that he is working, committing benefit fraud so market inspector Richard Cole does it for him, so he loses his benefits. This starts a feud between Alan and Richard. Alan even has to be restrained by Carol from beating Cole up when he accuses Alan of a local crime. Alan also fixes cars for David Wicks but is fired following a series of thefts, which eventually turn out to be Robbie. Alan is furious to be branded a thief and his anger towards David increases soon after when he sees Carol spending time with him. Alan accuses Carol of having an affair, unaware that David is actually Bianca's biological father. Upon discovering this, Alan becomes extremely jealous and is annoyed that Carol kept it from him, finding Bianca and David's father/daughter relationship hard to take.

In 1996, Carol and Alan attend the wedding of Carol's sister, April Branning. Carol's father Jim Branning and her brother, Derek are opposed to their interracial relationship, constantly trying to provoke Alan into violence. Despite Carol's family's prejudices, Alan and Carol decide to marry, taking April's slot at the church after she is jilted. After the ceremony, Alan is attacked by a drunken Derek, who has come simply to cause trouble. David intervenes and beats up Derek, making Alan and Carol grateful. However, cracks begin to show in their relationship. Money is a concern for Carol and her constant nagging about Alan's inability to provide drives him into the arms of another woman. Alan catches the eye of singer Frankie Pierre, who does everything she can to seduce him. Despite Alan's initial protests, he soon succumbs and they have sex. Alan regrets it and tries to call off the affair, but Frankie is hell-bent on destroying his marriage, and threatens to tell Carol unless he leaves her. When this does not work, Frankie plants lingerie in Alan's clothes and leaves her personal affects around his house. Carol inevitably discovers them and realises what has been occurring. She is furious and after an argument, Alan leaves and moves in with Frankie.

The separation causes Carol to reignite her romance with David, infuriating Alan. Frankie soon gets bored of Alan and her history of chasing unobtainable men and losing interest once she has them is revealed. Dumped by Carol and Frankie, Alan becomes severely depressed and his attempts to reconcile with his wife are constantly rejected. Things alter after Carol's son, Robbie, is beaten up by Ted Hills. Alan provides Carol with much-needed support and defends her family, which eventually leads to a reconciliation. In 1997, Billie is the only witness to an armed robbery at a building society. He is kidnapped in order to prevent him testifying in court, leaving Alan and Carol frantic with worry. Billie is returned safely but the Jackson family (bar Bianca and Robbie) are placed in a witness protection programme and leave Walford for their safety. However, terror that Billie will disappear again causes Alan to have a nervous breakdown, which leads to him and Carol splitting up again off-screen. Carol gets engaged to a new man, Dan Sullivan, but this ends after Dan has an affair with Bianca. Alan and Carol later reunite and live in Balham with Billie and Blossom.

In February 2010, when Bianca's daughter Tiffany visits Carol in Balham, it seems that she and Alan have split once again. When Sonia returns to Walford, it is suggested that Alan has a new partner and now lives in Forest Hill. Later in 2010, Alan comes to Walford to see Billie, not knowing that he has died, Carol avoids him and Bianca tells him before he leaves. He returns for Billie's funeral where Carol tries to kiss him but he pushes her away and reminds her that he is married. He attends Billie's wake with his wife and their son, Kai, and they leave afterwards with Blossom. 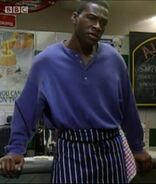 Alan Jackson - Name Card
Add a photo to this gallery
Retrieved from "https://eastenders.fandom.com/wiki/Alan_Jackson?oldid=199496"
Community content is available under CC-BY-SA unless otherwise noted.