Not to be confused with Abi Branning

Abi Branning was born prematurely on 29th December 2017, although she wasn't seen on-screen until two days later. Her name is dedicated to her deceased mother, Abi Branning. Her grandfather held her, Max Branning as her mother, Abi, was brainstem dead after she slipped from the roof of The Queen Victoria pub on Christmas Day. Her father, Steven Beale, died three months before (September 8, 2017), from an internal haemorrhage, also caused by her grandfather Max, after throwing him into the corner of a table with force after refusing to kill Jane.

The affair started after a one night stand on Abi's birthday when she was kissed by Josh Hemmings to make Lauren jealous – as Lauren had kissed Josh behind Steven's back and there was chemistry between the pair. This caused Lauren to break up the kiss and begin an argument between Abi, Steven and herself. After the fight, where Abi threw water over Lauren, Abi and Steven slept together. The affair continued after Steven suspected Lauren of cheating on him with Josh, and Abi (wanting Steven for herself so that she could get something over Lauren) fuelled these ideas to make Steven leave Lauren for her. However, this backfired when Abi told Steven that Lauren and her son, Louie Beale, were returning to New Zealand, causing Steven to tell Lauren he had a brain tumour and that he was dying so both she and Louie would stay. Even though Abi was initially disgusted by the idea that Steven had lied to Lauren about him having a brain tumour (because her mother Tanya Cross had had cancer), she helped him fake his illness by giving him medication meant for animals from the vets where she worked at. She also helped him spy on Lauren by keeping track of her movements and having knowledge of the spyware he was using to track Lauren's movements, watch her through a camera, and listen to her conversations. After hearing Lauren tell Josh that she wanted to leave him, Steven and Abi plotted to run away and start a new life together – kidnapping Louie in the process.

Abi discovers she is pregnant in early September and is delighted because she could give Steven the family he had always wanted. Steven and Abi are found out by Jane Beale, who confronts them. After speaking to Steven alone, Jane confronts Abi, who reveals she is pregnant with Steven's baby – but she hasn't told him. Steven then locked Jane in Ian Beale's restaurant and set fire to it, leaving her unable to move after taking away her crutches (which she was on after being attacked by Bobby Beale). Jane tells him, in a desperate plea, that Abi is pregnant – however, Steven doesn't believe her and leaves her to die. Abi, who had taken Louie for a walk (and told him she was going to be his new mother), saw the smoke coming from the restaurant and goes in, leaving Louie outside, thinking Steven is in there. She sees Jane and tries to go and get help, but when she goes to leave, the ceiling falls in on her, knocking her out. Steven looks at his phone and sees Lauren's tracker (which is on her phone) at the restaurant, not realising that Lauren's phone is just in the buggy and tells Max Branning (whom he has plotted with to kill Jane). Both run to the restaurant, thinking Lauren is inside but cannot find her. They find Abi and save her. Steven runs back in to save Lauren. Ian and Lauren arrive at the scene, and Max tells her and Abi that Steven is still inside. Abi and Lauren tell Max to get Steven, which he does after Lauren tries to go in instead. Inside the restaurant, Max throws Steven into a corner of a table with force, causing him to bleed internally. After collapsing, Abi tells Steven in the hospital that she is pregnant, and he is overjoyed – he then dies of an internal haemorrhage. Abi then takes the wedding rings that Steven had bought for himself and Lauren and wears them in grief (as he told them they would be for their wedding).

At Steven's wake, everyone finds out that Steven had been lying about the brain tumour after the cause of death is revealed to have been the bleeding. It is shown by the family liaison officer that he was taking animal pills to help fake his symptoms and that there was no sign of a brain tumour. This causes Lauren to destroy Steven's flowers and wreaths and cancel the wake, and Ian and Kathy Beale disown him – stating he was no blood relation of theirs. Abi, however, goes to the wake alone and reads a eulogy about how much he meant to her.

Lauren catches Abi wearing her wedding dress, and Abi tells her everything Steven did – the affair and the spying. She also admits to telling Steven about Lauren's abortion. They then fight over Steven's ashes (which Abi took off Billy when Lauren said she didn't want them, and she would flush them down the toilet if she ever did get them). Lauren flushes half of them down the bathroom, and the rest covers Abi, herself and the floor. Abi then tells Lauren she is pregnant. Lauren goes to the pub, and Abi follows her, where Lauren tells Jay about Abi's pregnancy and wishes a miscarriage on Abi. On Christmas Day 2017, Lauren, Abi and Lauren's son Louie were about to leave Walford to start a new life to go and live with their mother Tanya and younger brother Oscar Branning and Abi will raise her baby without Max in her life. Still, Abi spotted their father Max Branning on the roof of The Queen Victoria, and Abi ran up to see him, which made Lauren run after Abi. Abi then fell off the roof and days after giving birth to her daughter, was pronounced brain dead therefore Max was then left to raise the baby on his own and decided to name her Abi after her mother. After Abi's birth, she as placed in a particular baby unit but was visited many times by Max who promised to baby Abi that he will always put her first in everything that he does. In April 2018, Max introduced his new wife - and Tanya's sister Rainie Branning. However, she was only getting paid to do this so Max could get custody of Abi as her great-grandmother Cora Cross demanded to have custody of her. After Rainie had saved baby Harley from his biological parents fleeing the country with him, Max decided to introduce her to Abi and Max promised Abi that she would be with him very shortly. The next day, Abi's social worker came round to Max's brother Jack Branning's house and told Max and Rainie that they had a good chance of getting custody of Abi against Cora. At first, Jack didn't think Max should get custody of Abi, but he later changed his opinion when he realised how much Abi meant to Max. Stacey and Martin Fowler spoke to the social worker and told them that Abi would be so loved and spoiled if she was in the care of Max. Martin revealed he only did it because Stacey talked him into it after he said he would want people to stick up for him if he wanted custody of his and Stacey's young daughter Hope Fowler. In July 2018, Cora, alongside Abi, turned up in Walford and allowed Max and Rainie to have Abi for the night. Max and Rainie took turns to feed baby Abi during the night and getting her to sleep. The next day, Cora got upset when she saw how well Kim Fox-Hubbard bonded with her young daughter Pearl and confided in Patrick Trueman that she didn't think Max and Rainie would cope with looking after Abi. Cora asked Rainie to leave Max and offered her money. She told her that she could have her own business and bring baby Abi up with her sister Tanya and nephew Oscar- who is Max's son, but Rainie stuck by Max and told him about her mother. Max called social services about what had happened and showed them the proof. Rainie then told Max it wasn't about getting money from him or Cora and she wanted her, Max and Abi to be a real family. Max walked out, and Rainie said she only wants a baby.

Not wanting Max to get custody of Abi, Donna Yates bought some drugs from a dealer and posted it through Max's letterbox. She hoped Rainie would find the drugs and take them so it would be proved that she was unfit to be a mother to baby Abi, but Rainie never gave in and left the drugs alone. The next day, Max found them and confronted her. Rainie tried to explain, but he threw her out of the house. Max walked into the kitchen to get a drink, and Jack asked him what had happened, and Max said that Jack wouldn't need to worry about Rainie anymore as she has gone. Jack's daughter Amy then asked Max if Rainie was coming back, but he never answered her.

In November 2018, Cora was looking after Abi. Max and Rainie get a message from their solicitor telling them all the claims Cora has made - that their marriage is fake and Rainie has cheated on Max with Jack. Max then chucks Rainie out when their solicitor is fired, blaming her for losing Abi. When walking in the market, Cora turns her back on Abi's buggy to have a cigarette causing the pram to roll down the road and into the path of a reversing van - however, Abi is saved by Robbie Jackson. Martin Fowler later confronts Cora, who begs him not to tell anyone. Cora then plans to get Ian Beale onside, however, is confronted by Max and Rainie. Later in the pub, Cora and Rainie fight - which continues back at Ian's home. Cora hits Rainie over the head with a frying pan after Rainie asks to talk to her about what is best for Abi. Max then takes Abi out of the situation for her safety. The police, an ambulance and child protection services are then called who arrest Cora, take Rainie to hospital and Abi away from Max. After waking up, Cora visits Rainie and Rainie convinces her she isn't fit to look after Abi. Max also convinces Ian to support him in court. After Rainie arrives home, a social worker arrives and informs Max and Rainie that Abi can live with them for the time being, because Cora has revoked her plans for taking custody of Abi. Max then forgives Rainie for cheating on him. 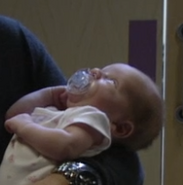 baby abi
Add a photo to this gallery

Retrieved from "https://eastenders.fandom.com/wiki/Abi_Branning_Jr?oldid=206729"
Community content is available under CC-BY-SA unless otherwise noted.