89B (The Ground Floor Flat)

Inbetween 1985 and 1994, the residents of this house were never seen or mentioned.

Jules Tavernier was the first known occupant of 89 George Street, when he moved into the ground floor flat (89B) in 1994. He also housed Blossom Jackson and Nellie Ellis for a while. Rosa, Gianni, Teresa and Nicky di Marco also lived here. Shirley Benson lived here in 2003.

The top floor flat (89A) was once occupied by noisy neighbour Gavin Sharp, who was forced out by Shirley's friends, the Ferreiras. Pat Evans then lived here.Laura and Bobby Beale also lived here with Pat until Laura falls down the stairs to her death. Natalie Evans stayed for a while in 2004.

The basement flat (89C)'s first known occupants were Steve Elliot and his girlfriend Lydia. Beppe di Marco lived here with his lodger Nina Harris. Later Billy Mitchell moved in and lived here with Janine Butcher and then his wife Little Mo. Kate Mitchell lived here from 2003 until her departure in January 2005. The next known residents of the flat are Vince Franks and his son Jez.

The Fox Family, Denise, Chelsea, and Libby lived here in the top floor flat from May 2006 until October 2006 when they moved in with Pat at number 31 Albert Square. After a short time Shirley Carter started renting the top floor flat. Her son Dean Wicks moved in for a while, but then he moved back to Pat's. Heather Trott moved in with Shirley in September 2007 to escape her controlling mother, Queenie. In February 2008 Shirley asked Heather to leave the flat, intending Dean to move in, once he was released from prison. Dean had other ideas and left Walford, leaving his mum alone.

On 11 March 2008, Shirley was evicted from the top floor flat by her landlord Norman. Norman is the last known occupant of the flat, explaining to Shirley at the time that he needed to live there after being caught cheating by his wife.

On 15 July 2008, Ian Beale announced to his wife, Jane that he had purchased the property after remortgaging their home. After cleaning the top flat and being initially refused by Ian, Dawn Swann handed two months rent to him in order for her and her partner Jase Dyer to live their with their respective children, Summer and Jay. On 18 July, Ian gave Dawn the keys to 89B, Dawn and Jase had a flatwarming party and invited the residents of the Square. When Jase is killed in the flat by Terry Bates and his gang, Dawn, and the kids move out.

In Late 2008, Garry Hobbs paid the deposit for Callum Monks to live in 89B, renting from Ian Beale.

In January 2009, Ronnie Mitchell moved in as Callum Monks moved back in with Garry Hobbs, Minty Peterson, Dawn Swann and Summer Swann due to Ian raising the rent on the flat and Callum was unable to afford it. Ronnie later moved back in with the rest of the Mitchells in March/April 2009.

In June 2009 Bradley Branning's girlfriend Syd Chambers moved in to flat 89B with her son Noah Chambers and dog Sugar and was later joined by Amira Shah in July 2009 after Janine Butcher had kicked her out. Zainab Masood briefly stayed with Amira in 2009 to get some space from her family. In October Syd and Noah leave Walford and move to Canada leaving Amira on her own. Amira moves out in 2010 after marrying Syed. Zsa Zsa Carter, Leon Small, Mercy Olubunmi and Fatboy squat here briefly in early 2010.

In 2011, Billy Mitchell moves into The Basement Flat with Julie Perkins. They later find Lola Pearce (their granddaughter) and she moves in. When Julie leaves, just Billy and Lola live in the flat. Lola gets pregnant, and gives birth to Lexi Pearce. Shirley and Tina Carter move in for a month while homeless in November 2013. Peter Beale also lived here while in a relationship with Lola in 2014. Honey returns in May 2014 and informs Billy that she wants to take William to Canada, and that she wants him to have Janet full-time.

On 17 October 2019, Martin Fowler and Tubbs Savage collect money from Carly, a resident of one of the flats (though not necessarily legally) on behalf of Ben Mitchell's moneylending business.

89B (The Ground Floor Flat) 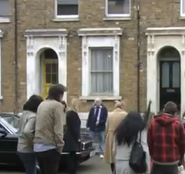 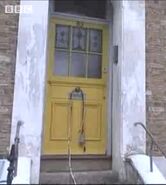 89 Georage Street Door
Add a photo to this gallery

89B George Street Inside
Add a photo to this gallery

Billy Mitchell's Bedroom (2015)
Add a photo to this gallery
Retrieved from "https://eastenders.fandom.com/wiki/89_George_Street?oldid=157525"
Community content is available under CC-BY-SA unless otherwise noted.