In 1935, newlyweds Albert Beale and Lou Beale moved into No. 45 Albert Square. The previous occupants are unknown. From 1936 to 1945, Lou and Albert had several children. In 1988, Pauline and Arthur Fowler inherited the house from Lou, after she died.

Jane left Ian and Peter left Walford. Not long after Lucy left and it was only Bobby and Ian left. One year after Lucy left Walford, Ian fell in love with Mandy Salter and she moved in. In January 2012, Lucy returned to Walford and found out that he was getting married to Mandy. Before their wedding, Ian kicked Lucy out and then Mandy decided to leave. Lucy moved back in and Ian was so devastated that he left Walford without telling anyone.

Lucy was left in charge of all the business, the home and the bills. There was a newcomer into Walford. It was Derek Branning’s estranged son, Joey. He helped out Lucy after what Derek had been doing to him. In the end, Lucy asked Joey to move in.

Ian was found and returned to Walford. Lucy would not let him in and after a couple of weeks of living with the Mitchells, Lucy allowed him to move back in on one condition, that he signed everything over to her. Ian then signed everything over to her on August 14, 2012 (premiered 17/08/2012). Ian took back the ownership of the businesses and the Beales' property empire in 2013. He is the owner of the house. 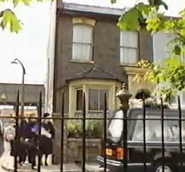 45 Albert Square Backyard (2015)
Add a photo to this gallery 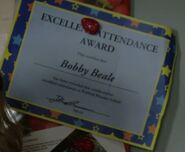 Lou and Michelle, 21 Jan 1988.
Add a photo to this gallery
Retrieved from "https://eastenders.fandom.com/wiki/45_Albert_Square?oldid=206156"
Community content is available under CC-BY-SA unless otherwise noted.