43 Albert Square is one of the most lived-in houses in Albert Square. It was originally owned by Andy O'Brien and Debbie Wilkins. Sue Osman lived with them after the death of her baby Hassan, and Naima Jeffery lodged with them for a while too. After Andy died in 1986, Debbie sold the property to James Willmott-Brown. When James bought The Dagmar, he moved into the flat above that, so he sold the property to Alan McIntyre, who then had the house converted into flats. He allowed Donna Ludlow to stay in the top flat in exchange for sex, but she was evicted in August 1988. The house was converted into 3 flats for about 25 years, but was reverted back into a house in 2013. Sadie Young, her husband Jake Stone and their daughter Bella move in, in November 2013. They live here for 2 months before moving out. In October 2014, Kat, Alfie, their 3 kids and Mo squat here while their homeless. They get away with staying there for two months, until the owners arrive and realise what has been happening.

By January 2018 the house has been purchased and refurbished by Jack Branning who then rents out the house to the newly returned Mel Owen and her son Hunter Owen later joins her.

In 2020, few months after Mel and Hunter's deaths, Ruby Allen moves in. Martin Fowler moves in with her just before lockdown. When Martin's ex-wife goes to prison his children, Lily, Arthur and Hope Fowler, move in.

In 1988, Number 43 was converted into flats. The downstairs flat, Number 43A, was bought by Den Watts for Sharon, Michelle and Vicki and they housed an unwanted lodger, Donna Ludlow, for a brief period.

Grant Mitchell bought the downstairs flat from Sharon in 1990.

Grant and Phil sell flats 43A and 43B as a pair for £110,000 in January 1992 to Willmott-Brown, who moves in following his release from prison and intends to (but doesn't) convert the flats back to a house. Although selling to Wilmott-Brown was controversial, there were few buyers due to the recession, and the sale was urgent in order to fund Sharon's acquisition of the license for the Queen Vic. Just one month later Willmott-Brown moved out and the flats were empty for a few months until he sold 43A to Frank Butcher in May 1992. Frank and Pat lived there until November 1993 when they sold it to Phil.

In 1994 Kathy Beale moved into the lower flat with Phil until they moved to 5 Albert Square. Ricky Butcher and Bianca Jackson then lived in 43a in 1996. Simon Raymond lived in 43a with his boyfriend Chris Clarke in 1998 and he later lived with Tony Hills here.

Before she married Jim, Dot Cotton also lived in 43a with her son Nick and grandson Ashley from 2000-2001.

Robbie Jackson and his girlfriend Nita Mistry lived in flat 43a in 2003 with Nita's son Anish. When they moved to India, Zoe Slater and Kelly Taylor moved in. Zoe moved out when she couldn't afford the rent, and was replaced by Gus Smith.

Kelly moved out of 43a in 2004 when she went to live in Ibiza and Gus's brother Juley moved in.

Keith Miller lodged with Gus and Juley when his wife Rosie kicked him out of their house.

In April 2007, Mickey Miller and his girlfriend Li Chong moved in with Gus. In July Li moved out, and Mickey moved back home following the birth his niece, Summer Swann, leaving Gus on his own.

In December 2007, Sean Slater moved in. Gus had told him that he already had a new tennant lined up, but Sean went ahead with his plan to get his feet under the table, and had the locks changed. When Gus returned from visiting his Auntie that evening, Sean had moved himself in and gave a shocked Gus the first months rent upfront. Gus was speechless.

After numerous clashes with Sean and a hostage situation, Gus left Walford in May 2008 with Keisha to go on tour and left Wellard the dog in the care of Mickey Miller and Sean later moved back in with his family at Number 23.

In June 2008, Lucas Johnson put down a deposit for the flat in order to be nearer to his daughter, Chelsea Fox. Lucas's son Jordan also lives here.

After Lucas and his son Jordan had moved in with Denise, Janine Butcher moved in with her friend Billy Mitchell and his foster son Jay Brown.

Billy and Jay later moved out to go and live back at the Queen Victoria.

Archie Mitchell briefly stayed with Janine as he had no where to go after the breakdown of his marriage and his family but then left a few days later in April 2009.

Syed Masood also stayed here briefly near the end of April 2009 as his father disowned him for his lies in the past but then he eventually went to live with the Masoods as the family agreed to give him another chance.

Amira Shah - Syed Masood's girlfriend moved in in June 2009. In July 2009 Janine had told Amira that she had a week to move out or she will kick her out after Amira had been offered a job at Booty by Tanya Branning after she and Janine had competed for the job with Amira winning.

In July 2009 Whitney Dean's half brother Ryan Malloy moved in with Janine.

In September 2009 Janine's brother Ricky Butcher moved in after he had a bust up with Sam Mitchell and Bianca Jackson. Janine moves out in December and moves into number 27 after Archie proposes to her. Janine moves back in after settling things with Ryan. Pat Evans also stays here briefly before Janine kicks her out.

Ryan moves out for a while after he says to Janine its over as things were not working and the fact that she was acting childish. But they eventually get back together with him moving back in and becoming engaged as he proposes to her. Ryan then goes on the run from the police and Janine moves out. Leaving the flat unoccupied.

Steve Owen and his sister Jackie lived in the middle flat, in 1999. Steve was later joined by Melanie Healy.

Steve sold 43b to Sharon Watts and her fiancé Tom Banks in 2002. Tom died later that year, but Sharon kept the flat on and her sister Vicki Fowler came to live with her, as well as her adopted brother Dennis Rickman.

The Watts later moved out of 43b in 2003, but Dennis and his girlfriend Zoe Slater, came back to live there in 2004. Both moved out when the relationship ended.

In April 2008, Ricky Butcher was offered the flat but refused. Vinnie Monks then moved in the flat with his girlfriend Shirley Carter and her bestfriend Heather Trott.

On 1 August 2008, Vinnie, after discovering Shirley had feelings for Phil Mitchell, threw her out of the flat but decided Heather could still stay. Vinnie later handed over the keys to the flat to Shirley, stating he was moving in with Gary and Minty.

Shirley then asked her friend Heather to move in. Heather had later moved out in April 2009 after Shirley starting sleeping with Phil Mitchell and they both kept getting drunk and leaving the flat in a mess. Shirley had later got her act together and dumped Phil as he was just using her which then made her to make a fresh start by getting a job at the chippy after losing her job as a barmaid at the Queen Victoria pub and she also asks Heather to move back in in May 2009.

In October 2009 Heather gave birth to a baby boy whom she had named George Trott. Billy Mitchell and Jay Brown also stay here for a brief time before moving in with Archie Mitchell. Phil Mitchell and son Ben moved in in December 2009 after Archie Mitchell had kicked the rest of the Mitchells out due to the loan they had been given by Ian Beale being sold to Archie and his fiancee Janine Butcher. The loan was not payed back so therefore Archie owned The Queen Victoria.

After Archie is killed Roxy gets the The Vic and Phil informs Shirley that he and Ben will be moving back there. Shirley is surprised when her niece Zsa Zsa comes to stay in early 2010. In March 2010, Shirley, Heather, Zsa Zsa and George all move to number 27 with Phil Mitchell and his son Ben. Heather and George move out shortly and back to 43b when Phil tells them that there isn't enough room for everyone. When Roxy kicks Billy and Jay out of their home due to their being unable to pay rent, they move into the flat with Heather and George. In August 2010 they are all evicted because the landlord could not make his mortgage repayments.

The top flat, was bought by Joanne Francis, one of the managers of The Firm in 1988. She then sold it to Julie Cooper in 1989, who eventually sold it to Phil Mitchell.

Phil sold the upstairs flat to Sanjay and Gita Kapoor. 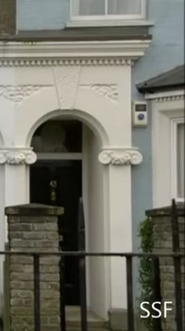 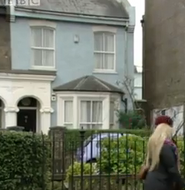 Michelle and Vicki Fowler's bedroom in 1988

Janine and Ryan
Add a photo to this gallery
Retrieved from "https://eastenders.fandom.com/wiki/43_Albert_Square?oldid=219105"
Community content is available under CC-BY-SA unless otherwise noted.