In between 1985 and 1993 the residents of this house were never seen or mentioned. When Frank Butcher bought the house in 1993 there was no mention of the previous occupants. In September 2016 Masood Ahmed leaves for a around the world trip and lets his house out. In October 2016 Carmel Kazemi signs a lease to rent the house out. In 2018, Masood moves his Aunty Mariam Ahmed and Uncle Arshad Ahmed in and lives with them. When Masood travels, Mariam and Arshad are joined by Habiba Ahmed and Iqra Ahmed.

There has been two deaths within this residence.

Alfie in the Masood's Kitchen. 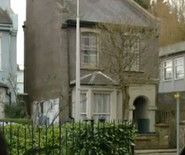 Masood's Hallway
Add a photo to this gallery
Retrieved from "https://eastenders.fandom.com/wiki/41_Albert_Square?oldid=140201"
Community content is available under CC-BY-SA unless otherwise noted.