The exact geography of Walford outside Albert Square, Bridge St, Turpin Road and George Street has never been fully pinned down so this model is the likeliest to the layout of Walford. See also Notes at bottom of page.

4th January 1994, set at the time of Episode 932 (4th January 1994). Sub headings under the images in the gallery even mention characters from the time to give a realistic feel to them.

4th Jan 1994, a sunny but cold winters day in Walford in the heart of London's East End. Click on images to enlarge.

Turning into Victoria Road, near the estate and Walford Garage.

Stopping to look down George Street from Victoria Road.

The other back entrance to Albert Square from Victoria Road bus stop.

Walking into Albert Square. The Vic, run by Grant Mitchell.

Whaddya think I am some sort of pilchard as the man would say? Frank's Car Lot.

The Queen Victoria, First Til Last and Launderette run by Pauline Fowler.

Looking down Bridge Street as we head towards Turpin Way.

Looking the other way down Turpin Road towards George Street.

George Street from the bus stop.

Albert Square from the platform of Walford East Tube Station.

Albert Square and surrounds from a block of flats nearby. Walford Towers and Walford General Hospital in the distance. 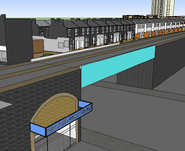 Spring Lane, Walford, Jan 1994, Les Coker had his business here then and there was a market.

Panorama of Walford, showing Walford Towers, St Cuthberts on the right and the River Lea, flowing through East London.

Another view of Walford, showing the distance between Albert Square and Spring Lane, which is to the bottom right.

Panorama of Walford from near Walford Towers looking to Canary Wharf, Jan 1994.

Albert Square from the nearby factory.
Add a photo to this gallery

8pm, night of 4th January 1994, the market has shut for the day, most of the locals are in The Vic or at home. Phil Mitchell is in Bridge St Cafe trying to convince Kathy he did not sleep with Nadia Borovac and lies to her. And Sanjay Kapoor cannot resist a piece of his sister in law Meena Mackenzie while Gita Kapoor is away. But she is coming home tonight, oh dear.

Walford as seen in a birds eye view, showing Walford locations that are mentioned frewuently but are a distance from Albert Square. Albert Square, Bridge Street, Turpin Road and George Street is circled blue and the red circle is Cafe, Victoria Road. Walford West Tube Station is on Walford High Street.

While the backlot used for filming the show has the police station behind the cafe in Bridge Street, in the fictional show itself, Walford Police Station is a walk away from Albert Square. It has never been stated that Victoria Square, Walford is actually behind Bridge Street and Turpin Road, so the model has it a few streets away from Albert Square.

The exact location within Walford of Walford West Tube Station has also never been explicitlly stated but the likeliest location is the high street so the model has it situated there. Spring Lane, Walford, has never been geographically pinned down as to how far it is from Albert Square but it is not far away, in this model it is off Victoria Road, near No 55 Victoria Road aka Pytchley.

Retrieved from "https://eastenders.fandom.com/wiki/3D_Simulation_of_Walford,_London,_E20_in_January_1994?oldid=155804"
Community content is available under CC-BY-SA unless otherwise noted.