Ian Beale later bought this property as well as No 29. The property was repossessed after he went bankrupt and this building now solely belongs to the council. In September 2004 Keith and Rosie Miller moved in, along with their children Darren, Demi and half brother Mickey. The following year Rosie's daughter Dawn Swann also moved in. Later on, the property was also occupied by Demi's daughter Aleesha, and Dawn's daughter Summer. In 2008, the property was burnt down after May Wright committed suicide after trying to kidnap Summer.

In 2009, Archie Mitchell bought the property. After his death, the property was left to Roxy Mitchell, who leased it to Phil and Shirley. In 2010, Roxy moves into the house for a short time, before selling the house to Greg Jessop & Tanya Cross, who refurbish the whole property.

In 2011, after Tanya's affair with her former husband Max Branning is revealed, Greg decides to leave the Square and sells the house to Janine Butcher, who has inherited a fortune after her grandmother's death. Janine evicts Tanya and her family, and moves in herself. Later Janine's boyfriend Michael Moon moves in.

In 2012, Janine and Michael get married, and have a baby named Scarlett. Janine, after a bout of post-natal depression, leaves the Square, leaving Michael and Scarlett in the property. During Janine's absence, Roxy and her daughter Amy move back in to help Michael with Scarlett. Michael's brother Tyler Moon also moves in. In April 2013, Janine returns to the Square, forcing Michael and Tyler out of the house. Janine lives in the house until her arrest for Michael's murder, and her subsequent exit from the square to start a new life in France.

In February 2014, Janine decides to sell the property to Roxy (50%) and Ronnie Mitchell (50%), who move in April. In July 2014, Ronnie reveals that she is pregnant, and leaves Walford to protect her baby. She returns in September, and Charlie Cotton moves in with her when they get engaged. Aleks Shirovs also moves in while in a relationship with Roxy, until she discovers that he has lie about divorcing his wife.After Ronnie's marriage to Charlie breaks down, he moves out of the house. Roxy also moves out of the house to live with her fiance, Dean Wicks, before leaving the square after his attempted rape.

Then in June 2016, Ronnie's deceased daughter's adoptive brother Andy Flynn who was working for Jack moved in as a tenant, but the later left Walford and moved out, soon after that Jack's son Ricky Mitchell moved in after his mother Sam Mitchell left him in custody of Jack and Ronnie and left Walford.

After the death of Ronnie and Roxy, Jack  and Glenda live in the house and both look after the Amy, Ricky and Matthew- as well as Max Branning moves in. At the moment, it's not been said who will own the house. After the inquest of Ronnie & Roxy,  Jack returns home furious as he blames Roxy for Ronnie's death, after finding out she was using cocaine before her death. When he returns home and find that Glenda has let Amy get her ears pierced, he gets angry and blames her for letting Roxy taking the drugs and causing Ronnie's death and throws her out , she not been seen or heard of since.

Since returning to Walford, Max Branning and Rainie Branning have lived with Jack and the children whilst trying to gain custody of his grandaughter Abi Branning Jr.

There has been 2 deaths at this house. 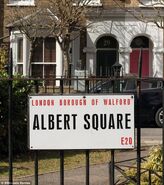 The house with the pink door. 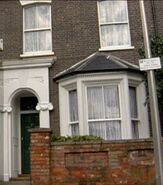 Front of the Miller House