25 Albert Square is a private owned rented property, originally the home of Tom Clements and his (unseen) sister. Following his sister's death he did a council swap with Dot Cotton, who lived in the flat next door. They swapped homes on 12 May 1987. Ethel Skinner moved in with Dot for a short while but soon moved out again after it caused their friendship to suffer.

In April 1989 Dot took pity on heroin addict Donna Ludlow, and after leaving her alone in the house for a few hours Dot returned to find Donna dead from an overdose on the floor in the front room.

Dot left Albert Square in August 1993 and the building was rented in November by the Jackson family (Carol, Alan and their four kids Bianca, Robbie, Sonia and Billie). The family separated after Bianca's affair with Dan Sullivan.

When Carol left the square, Robbie and Sonia moved back in with their grandfather, Jim Branning. Dot later married Jim and returned to her original home.

Robbie left to live in India, Sonia married Martin Fowler and moved into the the Fowler home (45 Albert Square). Naomi Julien also stayed in this property but only temporarily. Garry Hobbs and Minty Peterson moved in but did not like Dot's strict house rules and ended up not staying for very long. Jim's grandson Bradley Branning stayed with Dot and Jim as he hand just landed a new job at a London bank. Sonia again returned after splitting up from Martin Fowler and later Naomi.

Bradley briefly moved out to live in a flat with his new wife Stacey Branning, but he moved back in with Dot after her affair with Max Branning was revealed.

Clare Bates returned to the Square and stayed with Dot until she departed 6 months later.

At Christmas 2008, Nick returned with his daughter Dotty Cotton . They stayed there until Dot kicked Nick out after he tried to kill her. Dotty remained for another 8 months until she returned to live with her mother.

Since Jim had needed specialist care following a stroke, Dot decided he would be better looked after in a care home. Dot has also left to be with Jim. Whilst she was away Cora Cross, Arthur Chubb and Poppy Meadow were living in the property.

On Dot's return she discovered that the rent had not been paid for a considerable amount of time and that the council may charge her with fraud for not declaring the other tenants, the council later dropped the case. Poppy left the square after being dumped by Arthur and Dot asked Cora to leave. Dot lived alone with Arthur as a tenant and unlikely companion until her estranged grandson Charlie Cotton, Jr. moved in during Spring 2014, later followed by his mother Yvonne and returning father Nick.

Abi Branning moves in with Dot after she is kicked out by her boyfriend Ben Mitchell , but later she moves out. In December 2017 Abi suffers a traumatic brain injury and dies in hospital. Later In June 2017 Dot trips over Dave the Cat causing an injury to her hip Sonia Jackson Then returns to Dot Lying on the floor in pain she is then taken to hospital. fast foward to October 2017 Dot packs her bags to leave and visit her Grandaughter Dotty In Wales.

In 2018, Bex and Martin move in with Sonia after Martin splits with his wife Stacey Fowler . Martin moves back in with Stacey after a few months. Dot then returns home again in October 2018 after paying a visit to her grandson Charlie in Ireland, Dot then goes to then see a friend Dr Harold Legg. Dr Legg then stays with Dot for a while until he passed away in February 2019 causing Dot once again leaves for Ireland go and Stay with Charlie and Matthew Cotton. She returns 8 Months Later in October 2019 alongside her granddaughter Dotty, just in time for Bex's departure to Oxford. Bex overdoses and defers her place for a year.

In 2019 Martin moves back in after Jean Slater kicks him out. When Dotty returns to the square, she moves in, however, 4 months later Dot soon moves to Ireland for good after Sonia Jackson steals her pension money to pay off one of Martin Fowler's hit and run victims. after 35 years on Eastenders June Brown Officially Retired From Acting.

Leo King hides in the attic when he stalks Whitney Dean , and Bex moves out to live with Habiba , Iqra and Bobby . Whitney is arrested and sent to prison for Leo's murder, but got acquitted at trial. 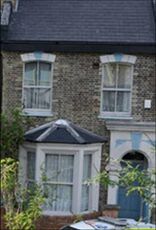 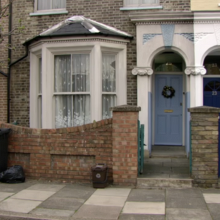 Dot Branning Counterpart
Add a photo to this gallery
Retrieved from "https://eastenders.fandom.com/wiki/25_Albert_Square?oldid=212372"
Community content is available under CC-BY-SA unless otherwise noted.