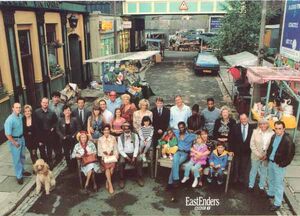 Towards the end of 1991, there was a flurry of activity behind the scenes at EastEnders, when Leonard Lewis and Helen Greaves joined the programme as co-producers. Together they formulated a new regime in which the writers of the schedule would 'drive' the series. Individual stories would be written and agreed or discarded at regular story conferences, and the progression of those stories would be the responsibility of the individual episode writers, with the script department providing guidance rather than prescriptive episodic storylines. With stories growing and developing in this new organic way, the writers were freed to write what they wanted - and the script editor's job of keeping the programme's continuity and tone intact became even harder!

The stories during 1992, while this new system evolved, were involved and lively. A danger of the new way of working was that stories wouldn't develop slowly, as they had in the past, and that events would occur suddenly and without warning. In practice, however, the stories were inter-related and fed each other remarkably well.

Some new regular characters made their debuts during 1992, and for the most part, they appeared gradually, making an initial appearance and then joining the programme full-time a couple of months later. This routine allowed the producers and writers to create new characters and see them brought to life by actors before committing them to a long contract.

The primary expectation of this was the creation of Tricky Dicky, the new man-we-love-to-hate. Richard Cole was designed to be a bit of a lad, a charming womaniser, and was supposed to be a Cockney according to his biography, written by Tony Jordan. However, when the producers saw Ian Reddington read for the part, they knew they had found Tricky Dicky, and the character's background was changed.

The other new characters made more tentative first appearances. Christine Hewitt first appeared in February as the latest employer of Arthur's gardening skills, but in the summer she returned to work with him. Mandy Salter visited the Butchers in March when her mother Lorraine was in a hospital. She left thinking that she was unwanted, and then returned in July to live in Walford. Nigel Bates also appeared in March, when bought Frank's Mercedes. When his mother died later in the year, Nigel returned to Walford and became Dot's lodger. In November, a visit to Michelle's college introduced some fellow students. Two of them, Shelley and Jack, would appear more regularly the following year.

There weren't just arrivals in the Square. The summer saw the departure of half of the Tavernier family, when Celestine got a new job, a significant promotion, in Norwich. Etta was unwilling to move, but after Lloyd got himself into trouble with the police by joy-riding, she decided that a fresh start for the family might be the best idea. She continued to commute to her school in Walford until the end of the term, then joined Celestine and Lloyd in Norwich.

We also saw the death of an original EastEnder when Ethel's faithful dog Willy succumbed to old age and had to be put down. Sadly not long after his last appearance as Willy, the dog who played him also passed away.

June saw another death - this time it was Gill, who married Mark only the day before she died. Carefully researched, Gill's death was the inevitable conclusion to the Aids storyline and was handled with great care. Despite this, some viewers were upset at the naming of the specific disease that Gill was suffering from at the time of her death, as it is frequently unconnected with Aids. For actress Susanna Dawson, the experience of playing a person living with, and dying from, Aids was so intense that she co-produced an educational video based on the subject for use in schools and wrote a book, The Gill and Mark Story, to accompany it.

The year began with problems for newlyweds Sharon and Grant Mitchell. He wanted to start a family, while she tried to concentrate on running the Queen Vic. Frank started to lose money and had to sell his Mercedes and the B&B. Pat, however, started up Pat Cabs which was run from the portacabin. Pat hit local teenager Stephanie Watson on Christmas Eve, and she was found to have been driving while over the drinking limit. Stephanie survived the accident but died a few days later in hospital as a result of her injuries.

In June, Mark Fowler married Gila, the day before she died of AIDS-related cancer, in scenes complimented for their sensitivity. Meanwhile, Arthur's friendship with Mrs Hewitt continued to develop, and on Christmas Eve they ended up in bed together.

During 1992, the sexual chemistry between Phil and his sister-in-law Sharon developed, and eventually erupted into a passion. They slept together and had to deal with the aftermath. Grant, still unaware of this affair set fire to the Vic in an insurance bid but failed, and Sharon, who nearly died in the fire, told Grant that they were finished. Phil was prepared to risk everything and say his brother, but when it came to the crunch, Sharon chose Grant.

Retrieved from "https://eastenders.fandom.com/wiki/1992?oldid=209215"
Community content is available under CC-BY-SA unless otherwise noted.