Behind the scenes, 1990 was a year of significant change for EastEnders. Michael Ferguson, as executive producer, introduced a system of having two producers responsible for the making of each alternative pair of episodes, and Richard Bramall and Corinne Hollingworth were the first of these new producers. Also, Michael changed the way stories were found, by asking for all accounts to be written as complete narratives, with beginnings, middles and ends, before they were broken down into precise episodes for scriptwriters. These stories were to come from any of the writers, the producers or from the expanded script department, which now had two story editors (senior script editors) and a storyline editor, in addition to script editors working on individual scripts.

The new system led to some solid, intense story-telling. Another innovation that Michael Ferguson introduced was a far more significant amount of location work than had previously been the norm. Now EastEnders would have the opportunity on a regular basis, to move away from the Square to tell its stories. It was a challenging period, both for those who had worked on the show for some time and for the many new faces that appeared at Elstree, but the results on the screen were a programme with a new sense of vitality, and a plan more in touch with the real world than it had been for a while. 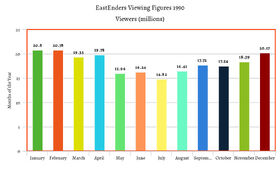 Throughout 1990, EastEnders aired two half-hour episodes in a time slot of 7.30 pm on Tuesday and Thursday. The events were broadcast on BBC1. A hebdomadal omnibus version was also broadcast on Sundays.

1990 held a moderately fair year with the ratings. Initially reaching the top thirty. June was the bad month for the ranks when the viewers sank to 12.33 million when EastEnders had a tremendous honour of scoring 20 or more million viewers a night. January stood the famous month for the year when the ratings adjusted to 20.80 million on the 4th January.

The ratings were very comparable to 1989, a year in which the ratings descended from the previous regular position in the ratings. In the 1980s, a single episode would usually achieve around 23 million and infrequently lift 25 or more million. Nevertheless, in 1990 it was very uncommon for EastEnders to accomplish such a quantity.

A few time slots were transferred to the standard schedule for EastEnders. This could be for many various purposes such as live coverage of a show or an alternative Christmas day schedule. The dates that this occurred was 25th January. 1st February. 21st and 26th June and 25th December. 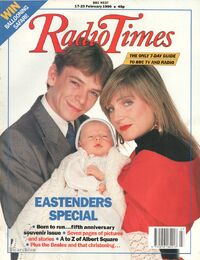 During 1990, the Butchers had to cope with the trauma of Frank's daughter, Diane, running away from home. Sharon spotted a ring on the market that she recognised as her father's. A local boy had found it in the canal, prompting the police to search it. A year earlier, shortly after Den's disappearance, the police had sought the channel but were unable to find his body. This time, a body was found in the canal, and it was identified as Den's. After Den's funeral, Sharon decided to search for her natural parents, but they rejected her. She returned to the square devastated.

Nick tried to poison his mother, Dot, after learning that she had won money on the bingo. Dot guessed and managed to escape unharmed. The love triangle between Wicksy, Cindy and Ian continued during 1990. Cindy confessed to Ian that she loved another man and that Steven was not his son. In an emotional frenzy, Ian crashed his van and ended up in hospital. He later discovered that Wicksy was Steven's birth father. Scared of repercussions, Wicksy and Cindy left Walford with Steven and set up home elsewhere.

The Mitchell brothers - Phil and Grant - arrived in the Square and bought the local garage. They were joined in Walford by their 15-year-old sister Sam. Frank Butcher decided to concentrate on running the car lot and sold the Queen Vic to a new landlord called Eddie Royle. Another new arrival in Walford was the Afro-Caribbean Tavernier family. 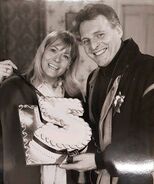 5th Anniversary
Add a photo to this gallery

(to be continued and corrected if any mistakes were made)

Retrieved from "https://eastenders.fandom.com/wiki/1990?oldid=209054"
Community content is available under CC-BY-SA unless otherwise noted.