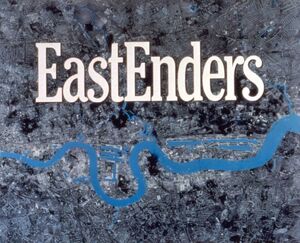 For EastEnders, 1989 was a funny year - in more ways than one. It was a transitional year with another three of the original characters leaving, along with half a dozen other regulars.

It was also a year of change behind the scenes as original production designer, Keith Harris, left the show. Co-creators Julia Smith and Tony Holland had both decided that the time had come for them to move on to other things as well, and their final contribution to the programme coincided with Den's exit in February. Without their hands to guide the programme, the new producer Mike Gibbon turned to the most experienced of the writers to take over the task of storylining the programme, so Charlie Humphreys, Jane Hollowood and Tony McHale shared this job for much of the year.

There was a deliberate effort to increase the lighter, more comic, aspects of life in the Square. By this stage in the programme's history, it had earned its long-standing reputation for being unrelenting doom and gloom, and the programme-makers were determined to change this. That led to the introduction of some characters who deliberately conceived as 'comic' characters. In many ways, this was a brave experiment, and the results were entertaining, but many viewers felt that this period of EastEnders lacked a certain edge. In reality, looking back at the stories that covered during the year, that analysis doesn't hold water because issues like domestic violence, drugs, rape, homoeopathic medicine and racism were all featured. Perhaps it was the new emphasis on a more balanced mix between light and heavy storylines that gave the illusion that the show had lost something.

Popular television had also been given a boost by the introduction in July of the previous year of the twice-weekly version of The Bill, a hard-hitting, gritty slice of police life drama which seemed to be challenging EastEnders in providing a realistic vision of modern life in London. So perhaps it was understandable that at the end of the year Peter Cregeen, the new Head of Series at the BBC, poached Michael Ferguson who had been a producer on The Bill to become executive producer of EastEnders.

As ever, there were also the big 'issue' stories. For the first time, the programme told a complete drugs story, with the sad tale of Donna's descent into heroin addiction. Matilda Ziegler's performance gave the story credibility, and the final death scenes were the most powerful anti-drugs images ever screened in the programme.

The programme also dealt with the issue of domestic violence for the first time, with the break-up of Carmel and Matthew's marriage. Another story involved Pauline ignoring a health problem she had and trying to use homoeopathic remedies rather than seek medical help. In the end, her fibroids were discovered by chance after Ricky knocked her over in his Mini, and Pauline spent Christmas in hospital.

Retrieved from "https://eastenders.fandom.com/wiki/1989?oldid=209042"
Community content is available under CC-BY-SA unless otherwise noted.