There were big changes in EastEnders in 1988. Behind the scenes, Julia Smith took a more back-seat role as series producer, allowing Mike Gibbon as producer to take control of the day-to-day making of the programme.

On-screen, 1988 saw the end of the two-pub era as the Dagmar disappeared - in flames - in the middle of the year and was replaced by a wine bar called Strokes, operated by the local Firm of organized villains. Meanwhile, it was also all change at The Queen Vic, when Pat Wicks and the Butcher family took over the tenancy.

Four more of the originals left the programme in 1988; Mary, Lou, Lofty and Angie. Mary had been one of the most striking of the original characters, a lone mother with a small baby, who hid herself under punk makeup, was unable to read or write and was a Northerner alone in a southern city. She left Walford the way she arrived, running away from her parents. Lou was frequently ill during 1988, and after a rest, in Leigh-on-Sea she returned to Walford in July in time to die. Lofty, heart-broken after Michelle aborted their child, moved on to become a handyman in a children's home and Angie found new love in the arms of Sonny and left England to run a bar in Spain.

Other exits during the year included poor old Tom Clements, potman and gardener, who died after suffering a stroke in The Queen Vic. Barry Clark left Walford to work on a cruise ship and Chris Smith left after his company ran into financial problems and had to be bought out by Walford Investments, the Firm's money-lending arm. Magda Czajkowski, let down by Wicksy and Den, took her Symphony Foods catering business to pastures new and Darren, proving that discretion is the better part of valour, did a runner when his various activities got a little too hot to handle.

Among the visitors were Kenny Beale and his daughter Elizabeth from New Zealand, who arrived in the spring. Also making an appearance was Brian Wicks, Pat's other ex-husband and, according to Pat in the middle of the year, the real father of Simon. New youngsters in this year included Sohail and Shireen Karim, Ricky and Diane Butcher, and Junior's little girlfriend Melody. A major batch of new characters was needed for the Den/prison storyline. In Walford these included Joanne, the manager of Strokes; Mr Mantel of Walford Investments; Brad, the Firm's local thug (who had appeared before but never so often as during this storyline); and Det. Insp. Ashley who joined Walford C.I.D. determined to close down the Firm. Inside Dickens Hill, Den was joined by prison officers Crane and Stone, and fellow prisoners Barnsey, Queenie, Vic and Brownlow, and the more familiar faces of Johnny Harris and Nick Cotton.

Back in Walford, the Butcher family was completed by the arrival of Frank's mother Mo Butcher, and Carmel gained a new partner, a white man called Matthew Jackson. Perhaps the most important character for the future had a very low-key entrance, appearing as another market-trader at first but quickly becoming involved with both Wicksy and Ian. This was Cindy Williams, who initially appeared helping her mother run a hat stall in Turpin Road.

Although not an episode of EastEnders, special mention should be made of the extra Christmas episode screened this year. It was a one-off programme called CivvyStreet which told the story of the Square during the Second World War. Written by Tony Holland and directed by Julia Smith, this special episode filled in some of the backgrounds to the EastEnders characters and was a fascinating experiment.

It was not the easiest of projects to write, however - Tony Holland was most upset to discover that Dot had been too young during the war to be featured as a useful character and also complained that the major events of the war occurred in the wrong order for effective drama! 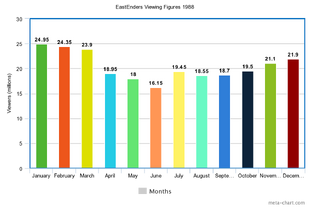 Nevertheless, the fundamental ratings for the show were very reasonable. The weakest score was 12.60 million on Episode 350 (14 June 1988), but the show soon struck its self back up when the ratings increased to 15.85 million in the following episode. The highest record was 24.15 million which was on Episode 305 (7 January 1988), the second episode to be transmitted this year. Aside from these two ratings, the show was reasonably well situated between the figures of 15 million and 21 million throughout the rest of the year.

Retrieved from "https://eastenders.fandom.com/wiki/1988?oldid=209036"
Community content is available under CC-BY-SA unless otherwise noted.