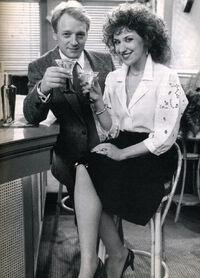 After the dramatic break-up of Den and Angie's marriage at the end of the previous year, the problem facing the EastEnders team for 1987 was simple - how to keep the Den and Angie story going despite the couple being separated. The solution was to make the pair professional rivals and the year became dominated by the tale of two pubs; The Queen Vic and the Dagmar.

This year also saw the most ambitious attempt yet to make EastEnders feel contemporary. References to current events such as the Boat Show or Wimbledon are used to make the programme feel up to date, but these are always very general since the programme is recorded five or six weeks before transmission. When the General Election was announced in 1987, it was felt that it would be too big a national event for the programme to ignore. The problem was that the date of the election, 11 June, was only announced early in May. At that time the programmes for early June had already been made.

A cunning plan was developed by Julia Smith and Tony Holland. First, they cut five minutes of material from each of the four episodes in the two weeks leading up to the election. These were then replaced with specially recorded election material which was shot by Julia Smith over two extra lot recording days. Some of this material was entirely new, such as representatives of each of the three major parties calling on an unimpressed Lou Beale, while other scenes were reworkings of the original scenes with added election material.

Great care had to be taken to be even-handed in the treatment of each of the parties. Finally, a quick scene was recorded on the day after the election to reflect the result. The scene was then edited into the programme over the weekend and appeared on the following Tuesday. It was complicated, difficult, last-minute operation but it did work. Nevertheless, at the next election in 1992, it was not repeated to the same extent.

In 1987, more and more characters came and went, including four originals. The first of the originals to go was Tony Carpenter. His dream of a possible permanent reconciliation with Hannah dashed, Tony had briefly returned to his old trade as a silversmith, only to find his honesty compromised when he bought some dodgy silver from Nick Cotton. Finally Tony decided to return his roots and bought himself a ticket to Trinidad.

Later in the year Kelvin also moved on, leaving Walford to begin a university course in East Anglia. As is often the case, Kelvin's final appearances were lot scenes. This is because the lot recording for each week's episodes happens typically two weeks before the studio recording of the same episodes. This enables an actor to appear in two weeks' worth of episodes 'lot only' at the end of their contract. So that is the real explanation for Kelvin shunning his leaving party - when the party was recorded Paul Medford was already out of contract! Paul, who had always entertained an ambition to be a singer/dancer, later enjoyed a long stage run in the hit show Five Guys Named Moe.

Debbie Wilkins finally left the Square in May, finding new happiness in the arms of a policeman, but this was Terry Rich rather than Roy Quick as might have been expected. Naima also left to remarry in November. A slightly less happy exit was the death of Lofty's Auntie Irene, who finally succumbed to cancer which had been killing her slowly for years.

Of course, there were also new faces to get to know. There were a number of new children - Mehmet's three kids, Emine, Rayif and Murat, appeared in February complete with pet snake Crush who promptly escaped, causing panic. Emine later got hurt by a thrown firework in the week of 5 November. Willmott-Brown brought his kids Luke and Sophie to visit Walford in March, and Carmel's life was complicated by the arrival of her brother Darren Roberts, who came complete with his children Junior and baby Aisha. Darren joined the programme at the same time as Rod the Roadie and Barry Clark's brother Graham, in a sudden influx of young men to the Square. Gary Webster, who played Graham, is now better known for his portrayal as Arthur Daley's nephew in Minder.

At the same time as these new young men appeared there was a similar batch of new young women. Tina was the young girlfriend of Ian, and she moved in with him in the basement of number 3 until her parents terminated both the arrangement and the relationship. The new woman in Den's life was Magda Czajkowski, a caterer who inspired Ian and later became involved with Wicksy. Donna was the child Kathy had given birth to after her traumatic rape at the age of fourteen. Donna's appearance had been primed by the visit of her godmother earlier in the year. The godmother, June Watkins, had told Kathy that her daughter wanted to make contact but Kathy refused to see her. Donna's entrance was planned very carefully so as not to give away her secret too quickly. We established her as a compulsive liar, telling different people different versions of her past. Even so, some quick viewers still guessed the truth.

Other visitors were less complicated. The new area manager at Luxford and Copley, Mr Sparrow, proved to be as dishonest as Den and refused to take 'No' for an answer when Den owed money. Alan McIntyre, Sue and Ali's new neighbour and landlord, was an unpleasant, anti-social man who didn't care what people thought of him while Duncan Boyd, the curate at the local church, had a simple honesty that appealed to the confused Sharon. Other new faces were Mary's mother, Edie Smith, Dagmar regular Gerry Fairweather, and Derek Taylor, who took a shine to Pauline during the Ladies Darts Team trip to Greenwich.

Frank Butcher - perhaps the most important new character of the year - only made a brief appearance in 1987. He was Pat's old flame, her first lover. Played by Mike Reid, the casting of a comedian in a dramatic role was controversial at the time, but over the years the wisdom of that decision had been proved because Frank became one of the show's most popular characters. 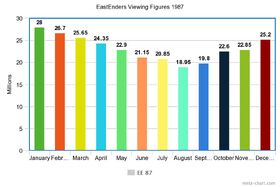 EastEnders underwent from a prominent deal of development in 1987 in the viewing totals, due to the high resolution of the Christmas Day episode in 1986 which achieved over 30 million viewers, the stimulating work certainly didn't crawl away instantly. Although the numbers steadily dropped by each month, it most surely picked its self back up towards the end of the year.

Retrieved from "https://eastenders.fandom.com/wiki/1987?oldid=209014"
Community content is available under CC-BY-SA unless otherwise noted.